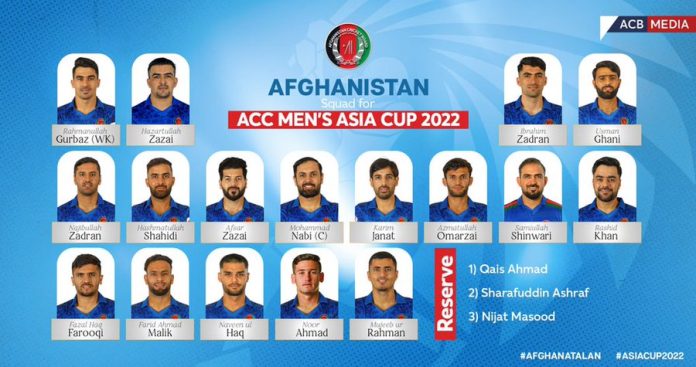 KABUL
Afghanistan named a 17-strong squad for the 2022 edition of the Asia Cup on Tuesday, August 16.
The side will be led by all-rounder Mohammad Nabi and sees one change from the 16-member squad in the ongoing tour of Ireland. Samiuallah Shinwari has replaced Sharafuddin Ashraf, who is now a part of the reserves. Spinner Noor Ahmed has also been added to the side.
Shinwari last represented Afghanistan in a T20I in March 2020, in a match against Ireland.
Alongside Ashraf, Qais Ahmed and Nijad Masood are the other two players on standby. The squad also features other regulars like Rashid Khan, Hazratullah Zazai, Najibullah Zadran and Mujeeb Ur Rahman.
On the squad, chief selector Noor Malikzai said, “The Asia Cup is an important event for us and, as such, we have picked our best available players for the event. Samiullah Shinwari has been added to the side for the Asia Cup. He is in very good form and can give further impetus to the batting department, which already boasts Ibrahim Zadran, Hashmatullah Shahidi, Najibullah Zadran and Mohammad Nabi.”
Afghanistan are currently on an away assignment against Ireland. After losing the first two encounters, the visitors bounced back brilliantly in the next two matches, levelling the series 2-2. The decider will be played on Wednesday, August 17.
The Mohammad Nabi-led side will open their Asia Cup campaign against Sri Lanka on August 27 at the Dubai International Cricket Stadium in Dubai.
Squad: Mohammad Nabi (captain), Najibullah Zadran, Afsar Zazai, Azmatullah Omarzai, Farid Ahmad Malik, Fazalhaq Farooqi, Hashmatullah Shahidi, Hazratullah Zazai, Ibrahim Zadran, Karim Janat, Mujeeb ur Rahman, Najibullah Zadran, Naveen ul Haq, Noor Ahmad, Rahmanullah Gurbaz, Rashid Khan, Samiullah Shinwari.