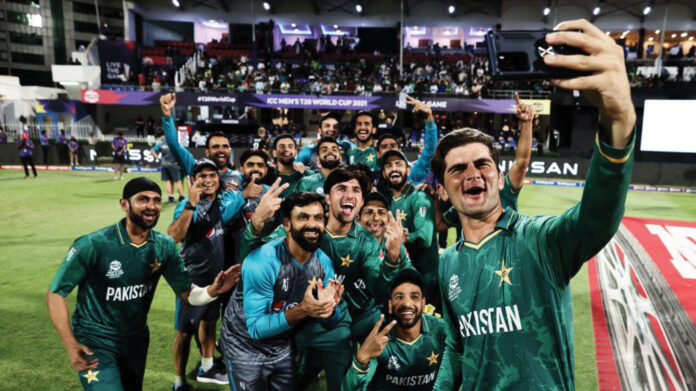 Afridi wins Sir Garfield Sobers Trophy, Babar named ODI player of the year, Root bags the Test award
Islamabad
Pakistan pacer Shaheen Shah Afridi has been awarded the Sir Garfield Sobers Trophy and recognised as the ICC men’s cricketer of the year in 2021. His captain, Babar Azam, has been adjudged the ICC men’s ODI cricketer of the year while England Test captain Joe Root is the men’s Test cricketer of the year.
“I feel truly honoured and privileged to become the first Pakistan cricketer to win the prestigious Sir Garfield Sobers Trophy for the ICC Men’s Cricketer of the Year,” Afridi said. “I had always dreamt of doing something unique and special for Pakistan. In this background, I am elated and thank Almighty for blessing me with this respect.”
In 2021, Afridi took 78 wickets in 36 internationals at an average of 22.20. At the T20 World Cup, he picked up seven wickets in six matches, including those of Rohit Sharma and KL Rahul and Virat Kohli in the group-stage fixture against India, helping steer Pakistan to the semi-finals. In Tests, he claimed 47 wickets in only nine matches at an average of 17.06.
“Every performance I gave for Pakistan was enjoyable and memorable and was made possible through the support of my teammates. But to me, the standout performances remained the three wickets against India in the ICC Men’s T20 World Cup 2021, and the 18 wickets I took in the two-Test series against the West Indies in Jamaica.”
Babar’s 158 in the third ODI against England at Edgbaston during the summer was instrumental in him winning the award.
With the series already lost, Pakistan were left to fight for World Cup Super League points, and Babar built on a solid foundation to bring up his career-best score. The knock, however, ended up in a losing cause due to a century stand between James Vince and Lewis Gregory.
Overall, Babar featured in just six ODIs in 2021, finishing with 405 runs at an average of 67.50.
“The best innings of the year if you ask me of the year, it’s this one. It’s the best innings of my career,” Babar said of his knock. “I was struggling a bit, I needed a knock like that and it gave me a lot of confidence.”
Meanwhile, Root’s splendid batting year that fetched him 1708 runs in 15 Tests with six centuries, played a key role in him bagging the Test honours.
Root’s purple patch started right at the start in Sri Lanka, where made a stunning double-century on a Galle turner, and followed that with prolific returns against India, both home and away. With the ball too, Root chipped in with 14 wickets including a maiden Test five-for against India in Ahmedabad.
Root’s numbers stood out amid a poor run from England, as they lost to India both home and away, and finished the year with two losses in Australia. England eventually lost the Ashes 4-0.
The knock that stood out was his 128 that helped England begin their India tour with a win in Chennai in February. He batted for 377 deliveries to craft 218 as England’s imposing first-innings total helped set the tone for a 227-run win.
“The Chennai hundred sticks out, to get it in my hundredth game will live long in may memory,” Root said. “Incredibly proud to have received this award. Humbled to be in the same breath as a number of players around the world. It means a huge amount to get this award.”
South Africa’s Marais Erasmus was named umpire of the year.