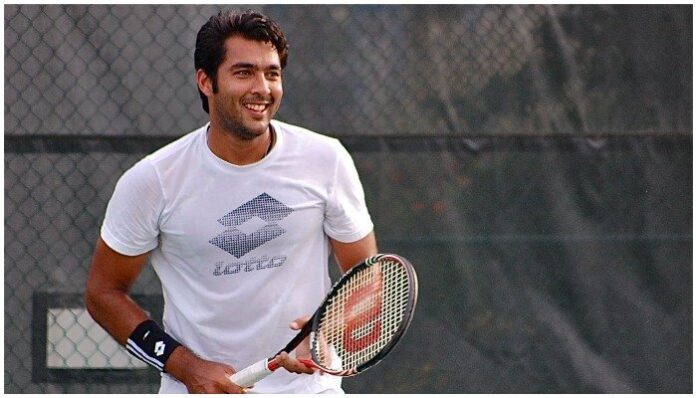 PESHAWAR
Legendary Tennis star Aisam Ul Haq along with country’s most Davis Cupper Aqeel Khan launches Nationwide Tennis Talent Hunt Program in four different cities including Peshawar wherein 52 players in different age groups turned up here at Pakistan Tennis Club on Wednesday.
Addressing a press conference soon after arrival provincial metropolis, the two legendary Tennis stars Aisam Ul Haq and Aqeel Khan with their team members Shahid Afridi (coach) and Haroon (trainer) conducted first day trials-cum-physical tests to hunt players in different age groups.
Chairman KP Tennis Association Dr. Tahir, Secretary Umar Ayaz Khalil, coaches Janan Khan, Level-II qualified coaches Zakir Ullah, Nouman Khan, Shaharyar Khan and more than 52 players were also present during the colourful opening ceremony.
“The players would be short-listed through a properly planned structure by giving each and every one in age group U12, U14, U16 and U18 a due chance to come and show their worth to ensure their selection,” Aisam Ul Haq told media men.
He said they are in Peshawar for two-day before conducting trials and physical tests in Lahore, Islamabad and would go to Karachi to select four players in all four groups and would be kept under qualified coaches and trainers so that they would be able to represent Pakistan internationally.
“My own coach and trainer will help out the selected players,” Aisam disclosed. He said the very positive outcome of the initiative with the help of sponsorship and more than 300 online registrations nationwide is a good number yet we are expecting more tennis kids to join this program during the trials in all cities.
“We’ve finalized the assessment program with our team of coaches and fitness trainers and good numbers of players turned up in Peshawar. It is very positive KP has good tennis talent,”Aisam Ul Haq said.
Aisam stated that he would sponsor 16 of the most talented youngsters to be selected from the trials and he would be taking care of their coaching, training every need besides enabling them to participate in the national and international events. The first-of-its-kind talent hunt program will help Pakistan to be part of the international circuit in future, the 42-year-old Aisam said.
“The aim of the talent hunt program is to identify youngsters who can go on to represent Pakistan in international events and also set a base at the grassroots level for Tennis to prosper in the country,” Aqeel Khan said.
The Ace-Academy Tennis Talent Hunt Program will help in the coaching and provide mentorship to the selected youngsters for a period of 12 months where they will be provided with the tools to accelerate their professional careers, he informed.
“I am super excited for launching the Ace Tennis Talent Hunt Program in Pakistan with 16 budding juniors from Peshawar, Islamabad, Lahore and Karachi that will be selected and sponsored for one year and for this we are working hard to find out sponsorship at least for a cause to boost Pakistan’s tennis only,” Aisam Ul Haq added.
Earlier, the selection of the players through playing tennis and physical fitness started in the morning and continued up to 5.00 p.m wherein players in the age of U16 and U18 participated on the first day and similarly for players in the age group U12 and U14 will be organized on Thursday before finalizing four names from Khyber Pakhtunkhwa for Talent Hunt Program.