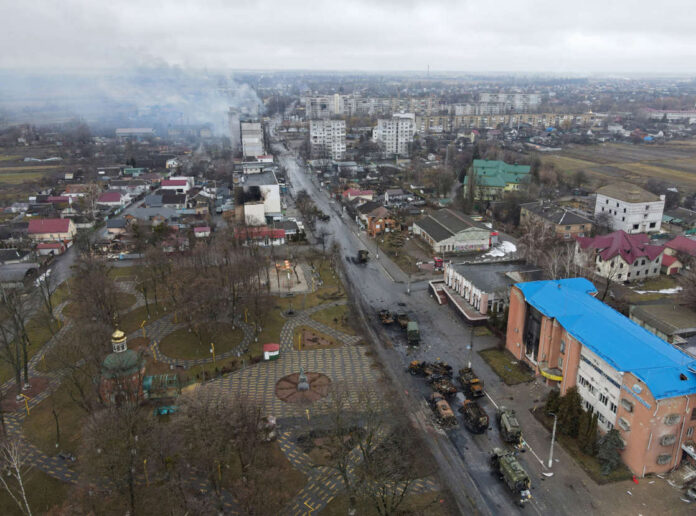 Vladimir Putin came a step closer on Thursday to war crime charges amid fears that cities in Ukraine faced being besieged and carpetbombed as Russian forces pursue a “slow annihilation” of opposition forces.

As horrifying new reports poured in from cities around Ukraine, the International Criminal Court’s top prosecutor told how he had ordered a team of investigators to fly immediately to the region.

ICC chief prosecutor Karim Khan said he was “jump starting” an inquiry into war crimes as Russian troops were increasingly adopting tactics used in Chechnya and Syria, which saw parts of cities reduced to rubble by indiscriminate bombardments, after failing to seize control of the country in a planned lightning advance.

On a visit to Tallinn in Estonia, Defence Secretary Ben Wallace said Putin’s generals, who themselves could face war crime charges, had deployed thermobaric weapon systems in Ukraine which can vaporise human bodies.

He added: “How far (Putin) will go, what weapons he will authorise to achieve his ultimate aim, is unknown but we’ve seen the use of massive amounts of artillery. We’ve seen the deployment of thermobaric artillery weapon systems and we worry how broad those could go.”

Russia’s strategy in the war is shifting toward a “slow annihilation” of Ukraine’s military, US officials believe, which could see a siege of the capital Kyiv and other major cities.

Asked if the Government was concerned about Russia’s reported policy of cutting off cities and towns in Ukraine in a bid to starve out residents, Britain’s security minister Damian Hinds told Sky News: “I’m not going to second guess what Vladimir Putin might be thinking, what might be in his head, but we do know that this is a ruthless, ruthless force.” As the invasion entered its second week:

Four loud explosions were heard overnight in Kyiv from where tens of thousands of women and children have fled amid fears that Russian forces could encircle it to try to force Ukrainian troops to surrender by inflicting a horrendous siege on the city’s residents.

British defence chiefs said the bulk of a 40-mile Russian military column heading for Kyiv had made “little discernible progress” over the past three days and remained more than 19 miles from the city centre. The column has been delayed by Ukrainian resistance, mechanical breakdowns and congestion, the ministry said in its daily intelligence briefing.

Russian shelling and attacks on civilian populations killed 34 in Ukraine’s eastern Kharkiv region in the past 24 hours, the emergency services said.

Hundreds of people were feared to have been killed in the southern port city of Mariupol, with the governor saying it was now without electricity or water supplies. “We are being destroyed,” said a city council spokesman.

More and more residential areas were being hit in what appeared to be indiscriminate bombing and missile attacks, with buildings, including in the city of Irpin, in the Kyiv region, being destroyed.

Russian forces entered the southern city of Kherson, according to its mayor Igor Kolykhaiev, who told residents to obey a Russian curfew and pleaded with soldiers not to shoot people.

Amphibious landing ships were seen forming up off the west coast of Crimea as US officials warned of a major assault on the city of Odessa.

Ukraine’s President Volodymyr Zelensky called on Ukrainians to keep up the resistance. “We are a people who in a week have destroyed the plans of the enemy,” he said. “They will have no peace here.” He urged Russian soldiers to “go home”, warning: “Ukraine doesn’t want to be covered in bodies of soldiers.”

The UN High Commissioner for Human Rights said 227 civilians had been killed and another 525 injured in its latest count of the toll in Ukraine, explaining that the figures were a vast undercount as it was only confirmed casualties. Ukrainian officials have suggested the true fatality figure was already more than 2,000.

The Kremlin has admitted that 498 Russian soldiers had died and 1,600 had been injured, however, British defence chiefs believe the casualty figure is most likely significantly higher. Ukrainian authorities claim about 9,000 Russia troops have died, although, this number may well be exaggerated.

A million refugees are already believed to have fled Ukraine.

Former British ambassador to Moscow Sir Roderic Lyne said mobile phones were Putin’s “biggest weakness” because Russians would be able to find out the truth about the war despite a media clampdown.

The London Stock Exchange said today it had suspended with immediate effect the trading of global depository receipts (GDRs) of several Russia-based companies including Rosneft, Sberbank, Gazprom, En+ and Lukoil.

The West is aware of Russia’s security concerns and will have to address them at some point, Russian foreign minister Sergei Lavrov told Russian state television. He said Moscow saw Western sanctions as a “tax on independence”.