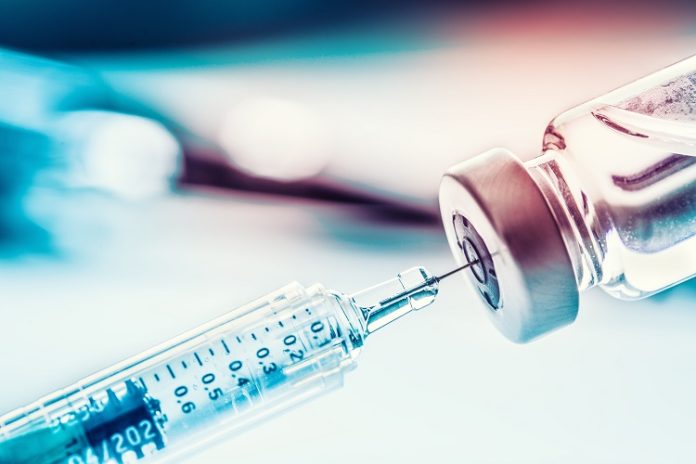 Over 896,724 children aged between nine months to fifteen years will be vaccinated in the campaign says DC Shafiullah Khan
PESHAWAR
A 12-days anti typhoid vaccination campaign has been launched in Peshawar here on Friday.
Deputy Commissioner Shafiullah Khan in a ceremony held at the DC camp office formally inaugurated the anti-typhoid campaign by vaccinating his children.
Additional Deputy Commissioner (Relief) Muhammad Imran Khan, District Health Officer (DHO) Peshawar Dr Muhammad Idrees, EPI-KP Coordinator Dr Muhammad Arif and others attended the ceremony.
“In the first phase of the campaign 896,724 children aged nine months to fifteen years will be vaccinated against typhoid fever,” Shafiullah Khan said while addressing the ceremony.
He maintained the typhoid campaign has been specially devised for the provincial capital which will be continued from October 3rd to October 15th.
DHO Dr Muhammad Idrees informed that at least 52 urban union councils of Peshawar will be covered through door-to-door campaign, adding that the health department has formed 633 outreach teams, 82 fixed teams and 30 mobile teams for successful coverage of anti-typhoid vaccination.
“The campaign will be supervised by 144 first level supervisors and 51 medical officers while the district administration and health department officials will also assist the mobile teams for yielding better results,” he added.
Clarifying the misconception, he said that there were no side effects of this vaccine. DHO Peshawar underlined the need for creating awareness.
Since typhoid vaccine is a new program, there is a need to promote awareness programs for public awareness, he added.
Coordinator Dr Muhammad Arif on the occasion told the participants that Typhoid fever can be proved fatal for children, adding that the fever is caused by a special bacterium.
He said children are more at risk of getting typhoid fever than adults.
DC Peshawar urged all sections of the society including civil society and media to play their role in the drive for healthy children.