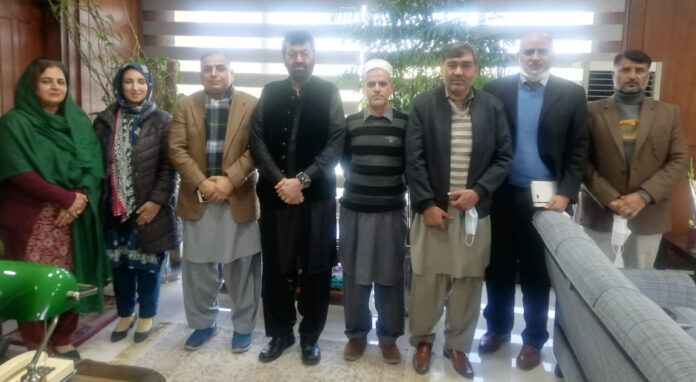 Islamabad
A delegation of the cabinet members of All Pakistan Universities BPS Teachers Association (APUBTA) in the leadership of President Dr Sami ur Rahman held a meeting on January 27, at the Higher Education Commission (HEC) Islamabad.
The president APUBTA congratulated the chairman HEC for resuming his duties after restoration by the Islamabad High court. Dr Imtiaz Ahmad, GS APUBTA, Dr M. Asif Jan, President APUBTA KP, Dr Pakeeza and Dr Rehana Kausar, VP APUBTA also attended the meeting.
The matter and progress on the draft BPS statutes was discussed in detail. The president APUBTA shared the achievements on the draft by the ED, Dr Shaista Sohail and her team during his absence. The circulated and original copies of draft statutes were also discussed and handed over to the Chairman.
The DG Academics Mr Suleman and Dy Director Dr Abaidullah explained the features of the draft and discussed the opinion and views of commission members during the last meeting of the commission. The Chairman agreed upon the inclusion of the promotion of non PhDs in the draft for next meeting of the commission.
The delegation requested the Chairman to process the draft statutes as the discriminatory policies in violation to the HEC ordinance are no more tolerable for the BPS faculty. The Chairman stated that as he was out of office so a time upto two weeks may be required to continue effective process on the draft being a major change in policy.
The Chairman assured that the refined draft shall soon be submitted to the commission for consideration in the forthcoming meeting.