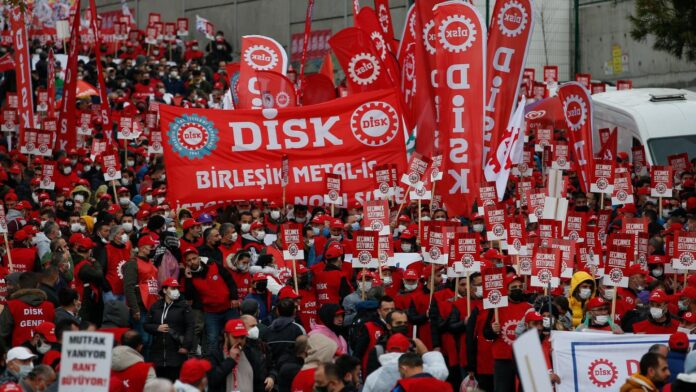 ANKARA
Amid a deepening economic crisis in Turkey, anger is growing towards the millions of refugees living in the country, with tensions threatening to spill over in recent weeks.
Videos of large groups of foreign nationals hanging out in various places of Istanbul are being shared with rising frequency on Twitter, with thousands of people taking to social media to express alarm and calling for refugees to be sent back to their countries.
Some Turks also accuse Syrians of “stealing” their jobs and being responsible for rising rental prices, as inflation soars and the value of the lira slumps. Polls indicate that the vast majority of Turkish citizens now want refugees to be sent home.
Analysts say politicians are increasingly seizing on this resentment and using it for political gain ahead of Turkey’s parliamentary and presidential elections due to take place in June 2023.
According to recent Interior Ministry figures, Turkey is home to more than four million refugees, 3.76 million of which are Syrians. The country also hosts hundreds of thousands of Afghan refugees.
Opponents of the ruling Justice and Development Party (AK Party) claim that these figures are vastly underreported.
Among these critics is Umit Ozdag, a parliamentarian formerly of the far-right Nationalist Movement Party (MHP), the AK Party’s current coalition partner. Ozdag was booted out of the party in 2016, joining the opposition right-wing Good Party (IYI) the next year before breaking away to form his own party, the Victory Party, in August 2021.
Under the slogan “Victory will come to power, all refugees and illegals will go”, the party’s popularity has grown. They claim – without evidence – that there are more than eight million refugees currently in Turkey, which would amount to about 10 percent of the country’s population.
The party recently commissioned a short fictional film called Silent Invasion which is set in 2043 and depicts a Turkey where a Syrian political party is newly elected to power, pledging to make Arabic the official language of the country. In the film, a Turkish man is harassed by Syrians on the street and forced to run for cover when they chase after him. Planning on becoming a doctor, he instead works as a hospital janitor and tells his parents that it is illegal to speak Turkish at his workplace. The film has more than four million views on YouTube since its release on May 3.
Interior Minister Suleyman Soylu has blasted the film, dubbing it a provocation and a direct attack against the government.