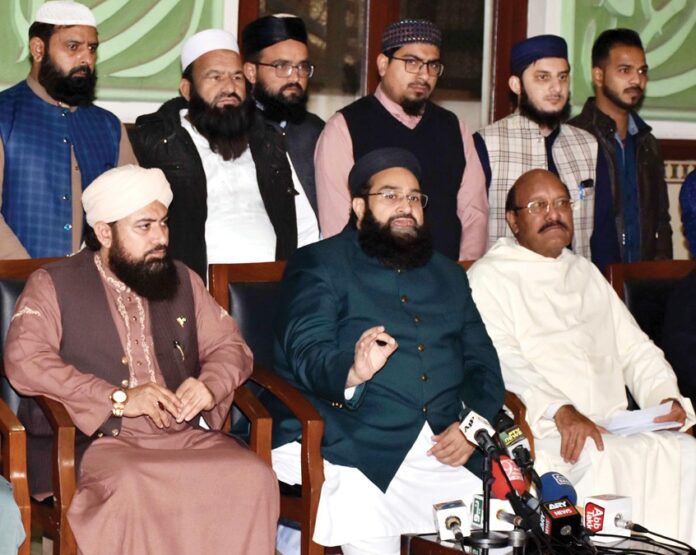 PM’s aide urges speedy trial into the case; leaders of all faiths denounce the ghastly act
LAHORE
Special Representative to Prime Minister on Religious Affairs Tahir Ashrafi on Sunday asked Chief Justice of Pakistan Gulzar Ahmed to treat the Sialkot lynching as a test case and ensure a speedy trial into the case. He made the remarks while addressing a press conference at the Quran and Seerat Academy in Lahore along with religious leaders from different schools of thought.
The special representative said that followers of all religions and religious parties in the country strongly condemn the lynching, and express grief and concern on linking the incident to religion. “Those involved in the incident have brought a bad name to the religion as well as the country,” he added.
Ashrafi demanded exemplary punishment for the perpetrators of the incident to avoid recurrence of such incidents in future. He said Muslim, Hindu, Christian and Sikh communities of Pakistan want to convey to the Sri Lankan people that “we are ashamed at the incident and we apologise to you”, adding that all-out efforts would be made to eliminate culture of extremism from the society.
The special representative termed the incident “an individual act”, saying it did not represent the whole nation. Ashrafi further said that so far, 19 key suspects have been arrested. He said the case would be tried in an anti-terrorism court. He observed that the law of Tauheen-e-Namoos-e-Risalat and Tauheen-e-Mazhab as well as the courts and legal procedure are already in place, therefore, no one should be allowed to take law into their hands.
On the occasion, the special representative announced that a delegation of clerics, headed by Federal Minister for Religious Affairs Pir Noor-ul-Haq Qadri, would visit the Sri Lankan embassy to express their grief over the tragic incident. The religious leadership expressing solidarity with the people of Sri Lanka also apologised on brutal murder of Sri Lankan factory manager who was lynched to death in tragic Sialkot incident.
The religious leadership also stated unanimously that Sialkot tragic incident will be strongly condemned in all mosques across the country in Friday congregations and in all churches and places of worship on Sunday. Central leaders of all the religions of Pakistan including Muslims, Christians, Hindu, Sikh religions and all Muslim schools of thought termed the Sialkot tragic incident as barbaric and brutal and condemned it vehemently expressing solidarity with the victim’s family and the people of Sri Lanka.
The lynching of the Sri Lankan National factory manager was not religious but of an administrative nature as the slain factory manager used to ask the factory workers to do work with honesty and diligence.
The religious leadership also announced that on Friday, ‘Condemnation Day’ will be observed across the country against tragic incident of Sialkot and public will be given awareness on blasphemy laws.
The Pakistan Ulema Council and Interfaith Harmony Councils also announced giving shields and acclamation certificates to the two brave young men who did their best to rescue the Sri Lankan manager from mob.