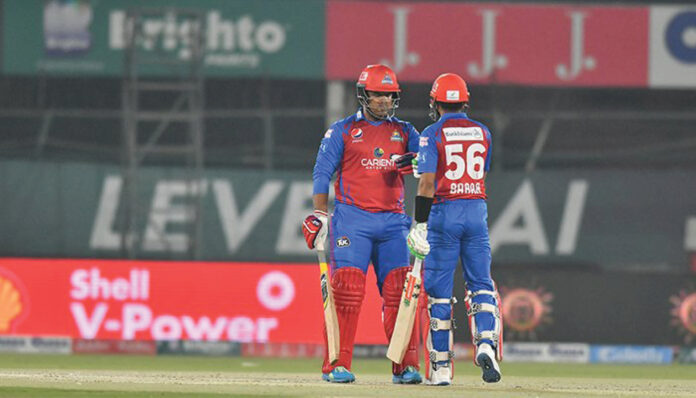 PSL 2022
KARACHI
The Multan Sultans’ have dismissed the opening pair of the Karachi Kings and they seek to pile more pressure on the ex-champions in the opening match of the PSL 7 at the National Stadium.
Imran Tahir dismissed hard-hitting batter Shajeel Khan (43), who was on a roll with his opening partner and Kings’ skipper Babar. Later, Khushdil Shah took the wicket of Babar in the next over (23). The Kings have reached 71 for the loss of two after 11 overs.
Defending champions Multan Sultans had won the toss and elected to field first against Karachi Kings.
Pakistan skipper Babar Azam, who has replaced the King’s former captain Imad Wasim, is leading the squad this season, whereas the Sultans is led by the country’s star cricketer, wicket-keeper batter Mohammad Rizwan.
The game is surely a tough one as both sides are the best teams of PSL as well as the champions of the tournament.
The National Stadium has been a lucky spot for Karachi Kings whenever the side has faced Sultans because they triumphed in both the matches played at the venue between the two teams.
Multan Sultans will definitely be looking to have a fine start to their title defence. However, they will be missing the experience of Shahid Afridi and Sohail Tanvir, both now with Quetta Gladiators.
Besides captain Mohammad Rizwan they have some fine T20 batsmen who can plunder runs at any stage. Hard-hitting Tim David, Sohaib Maqsood, Rilee Rossouw and Khushdil Shah can take the game away from any side at any time.
Shahnawaz Dahani will as usual be looking to put in his best. The best thing seen in him recently has been his economical bowling and particularly in the last game against the West Indies in which he was utilised recently at home Dahani was fantastic with the leather.
Kings have around six specialist batsmen, besides having utility all-rounders.
Their skipper Babar Azam showed satisfaction over the combination of his side during a news conference the other day.
Babar himself will be the key as usual. And it will be around him the whole batting lineup will revolve. Sharjeel Khan will be looking to impress the selectors both with his form and fitness.
The Kings suffered a huge blow as former skipper Wasim and international player Jordan Thompson have tested positive for coronavirus, few hours before the start of the match.
Head to head:
Overall, nine matches have been played between the two sides, with the Kings winning five and the Multan Sultans pocketing victories in two games. One match did not yield any result while one was abandoned.
Playing XI
Karachi Kings: Babar Azam (c), Sharjeel Khan, Joe Clarke (wk), Mohammad Nabi, Tom Lammonby, Lewis George, Aamer Yamin, Mohammad Imran, Mohammad Taha, Umaid Asif, Mohammad Ilyas
Multan Sultans: Mohammad Rizwan (c)(wk), Shan Masood, Sohaib Maqsood, Rilee Rossouw, Tim David, Khushdil Shah, David Willey, Imran Tahir, Imran Khan sr, Shahnawaz Dahani, Ihsanullah
Opening ceremony
The seventh edition of the tournament kicked off at National Stadium, Karachi evening with a spectacular opening ceremony.
PSL 7 anthem artists Atif Aslam and Aima Baig performed in a colourful opening ceremony.
Prime Minister Imran Khan’s special message to PSL teams was also played during the ceremony, followed by a vibrant fireworks display.
“I am opening the seventh PSL and I hope every team fights till the last ball and entertains the public,” Prime Minister Imran Khan said in a video message.