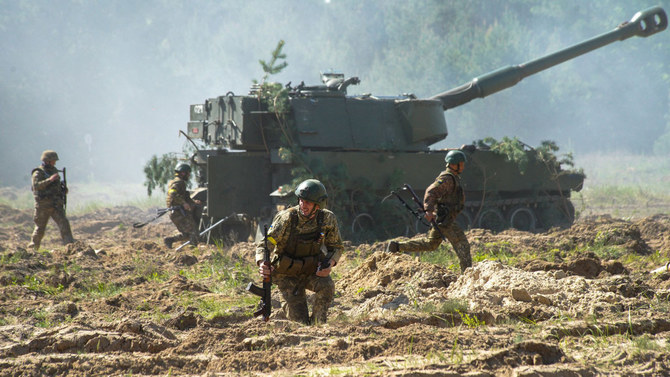 KYIV
Ukrainian forces struggled to hold their ground in bloody street-to-street fighting in the eastern frontline city of Sievierodonetsk as President Volodymyr Zelenskiy said the situation was difficult, also pledging to retake Russia’s gains.
The days-long battle for the industrial city has emerged as pivotal, with Russia focusing its offensive might in the hope of achieving one of its stated aims – to fully capture surrounding Luhansk province on behalf of Russian-speaking separatists.
“We have to achieve a full deoccupation of our entire territory,” Zelenskiy said by video link at an event hosted by Britain’s Financial Times newspaper on Tuesday.
Asked about comments by France’s Emmanuel Macron that it was important not to “humiliate” Moscow, interpreted in Ukraine as implying some demands must be accepted, Zelenskiy said: “We are not going to humiliate anyone, we are going to respond in kind.”
The governor of the Luhansk region, Serhiy Gaidai, said the defenders were finding it hard to repel Russian attacks in the centre of Sievierodonetsk.
Sievierodonetsk, Lysychansk, and Popasna remain the most difficult places, Zelenskiy said late on Tuesday.
Moscow said its troops have been advancing, while Zelenskiy said the “heroic defence” of Donbas was ongoing. Reuters could not independently verify the situation on the ground.
Since being pushed back from Kyiv and Kharkiv, Russia has focused on the region known as the Donbas, comprised of Luhansk and Donetsk provinces, and closest to the Russian border.
Moscow says it is engaged in a “special military operation” to disarm and “denazify” its neighbour. Ukraine and allies call this a baseless pretext for a war that has killed thousands, flattened cities and forced millions of people to flee. Zelenskiy said Ukraine would launch next week a “Book of Executioners” to detail war crimes.
“These are concrete facts about concrete individuals guilty of concrete cruel crimes against Ukrainians,” he said.
Russia says it has gone out of its way to avoid targeting civilians in its operation in Ukraine.