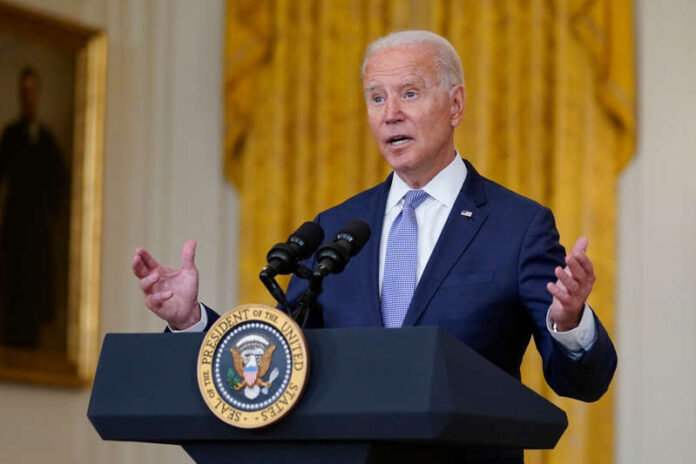 When the pace of vaccinations in the U.S. first began to slow, President Joe Biden backed incentives like million-dollar cash lotteries if that’s what it took to get shots in arms. But as new coronavirus infections soar, he’s testing a tougher approach.

In just the past two weeks, Biden has forced millions of federal workers to attest to their vaccination status or face onerous new requirements. He’s met with business leaders at the White House to press them to do the same.

Meanwhile, the administration has taken steps toward mandating shots for people traveling into the U.S. from overseas. And the White House is weighing options to be more assertive at the state and local level, including potential support for school districts imposing rules to prevent spread of the virus over the objection of Republican leaders.

“To the mayors, school superintendents, educators, local leaders, who are standing up to the governors politicizing mask protection for our kids: thank you,” Biden said Thursday. “Thank God that we have heroes like you, and I stand with you all, and America should as well.”

But even as Biden becomes more aggressive, he has refrained from using all his powers to pressure Americans to get vaccinated. He’s held off, for instance, on proposals to require vaccinations for all air travelers or, for that matter, the federal workforce. The result is a precarious balancing act as Biden works to make life more uncomfortable for the unvaccinated without spurring a backlash in a deeply polarized country that would only undermine his public health goals.

Vaccine mandates are “the right lever at the right time,” said Ben Wakana, the deputy director of strategic communications and engagement for the White House COVID-19 response, noting the public’s increasing confidence in the vaccines and adding that it marks a new phase in the government’s campaign to encourage Americans to get shots.

Many Republicans, particularly those eyeing the party’s 2024 presidential nomination, disagree and warn of federal overreaching into decisions that should be left to individuals. Biden and Gov. Ron DeSantis of Florida, an epicenter of the latest virus wave, have spent weeks feuding over the proper role of government during a public health crisis.

There is notable support for vaccine mandates. According to a recent poll from the Kaiser Family Foundation, 51% of Americans say the federal government should recommend that employers require their workers to get vaccinated, while 45% say it should not.

For now, Biden has required most federal workers to attest to their vaccination status under potential criminal penalties, with those who have not received a dose required to maintain social distancing, test weekly for the virus and face other potential restrictions on their work.

Health workers at the Department of Veterans Affairs and the Department of Health and Human Services will be required to get vaccinated, and the Pentagon has announced that it intends to mandate vaccines for the military by next month.

The sharper federal approach comes as nearly 90 million eligible Americans still have not been vaccinated and as Dr. Anthony Fauci the nation’s top infectious disease expert, says shots are the only path for the nation to contain the delta variant.

White House officials say Biden wanted to initially operate with restraint to ensure that Americans were ready for the strong-arming from the federal government. The federal moves have been carefully calibrated to encourage a wave of businesses and governments to follow suit.

Biden administration officials briefed prominent Washington trade groups, including the Chamber of Commerce and the Business Roundtable, ahead of the federal announcement in hopes their members would follow suit. White House officials have fielded dozens of calls from business executive in recent weeks about how to implement their own vaccination mandates, officials said, sharing best practices and tips for how to protect their workforces.

“Through vaccination requirements, employers have the power to help end the pandemic,” White House COVID-19 coordinator Jeff Zients said Thursday, naming companies, universities and local governments that have implemented them.

The new restrictions appear to be having the desired effect. The rules — combined with fresh concerns about the surging delta variant — have nearly doubled the average rate that Americans are getting newly vaccinated from last month to about 450,000 per day.

Zients said the White House still has no plans to develop the infrastructure for so-called vaccine passports, despite some criticism from businesses that the patchwork of local and state verification systems leaves them without a clear way to enforce mandates. The Biden administration had promised to share frameworks for verification systems, but ultimately left them all to the private sector and local governments, in part because of political sensitivities.

Still, while more severe measures — such as mandating vaccines for interstate travel or changing how the federal government reimburses treatment for those who are unvaccinated and become ill with COVID-19 — have been discussed, the administration worried that they would be too polarizing for the moment.

That’s not to say they won’t be implemented in the future, as public opinion continues to shift toward requiring vaccinations as a means to restore normalcy.

Lawrence Gostin, a professor of health law at Georgetown University, said Biden would likely need to continue to turn up the pressure on the unvaccinated. “He’s really going to have to use all the leverage the federal government has, and indeed use pressure points,” Gostin said. “And I think there are a few that he can do but he hasn’t done yet.”

“The country is completely fatigued with lockdowns, business closures and masking,” added Gostin, “and vaccines are literally our only tool. We’ve tried masking, distancing, occupancy limits, even entire lockdowns now for coming along nearly two years. And the virus just keeps raging back. And the vaccines are the only thing we have now to defeat the virus. We need to use that tool and we need to use it vigorously. And I think there will be large public support for that.”

From news to politics, travel to sport, culture to climate – The Independent has a host of free newsletters to suit your interests. To find the stories you want to read, and more, in your inbox, click here.