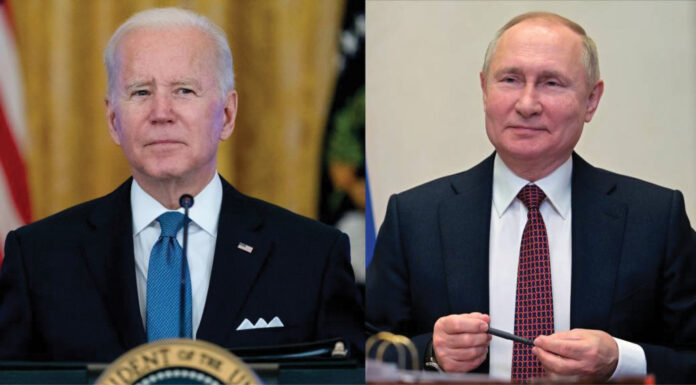 US makes preparations to avoid European gas crisis if flow from Russia is cut, while talks aimed at defusing tensions continue
Ukraine
Joe Biden has said he will consider personal sanctions against Vladimir Putin if Russia invades Ukraine, as western leaders step up military preparations and make plans to shield Europe from Russian gas being cut off.
The rare sanctions threat came as Nato placed forces on standby and reinforced eastern Europe with more ships and fighter jets in response to Russia’s troop buildup near its border with Ukraine.
If Russia attacked, Biden said, it would be the “largest invasion since world war two” and would “change the world”. The president said he would consider adding direct sanctions on Putin to a raft of measures being drawn up.
“Yes. I would see that,” Biden said when asked by reporters in Washington about targeting Putin, whom opponents have long accused of holding gigantic secret wealth.
A senior US official laid out economic sanctions “with massive consequences” going far beyond previous measures implemented in 2014 after Russia invaded Ukraine’s Crimea region.
Russia denies planning an attack and says the crisis is being driven by Nato and US actions. It is demanding security guarantees from the west including a promise by Nato never to admit Ukraine as a member. Moscow sees the former Soviet republic as a buffer between Russia and Nato countries.
Efforts to resolve the tensions diplomatically have continued, with officials from France, Germany, Russia and Ukraine expected to meet in Paris on Wednesday.
The threat of sanctions on Putin came as the US helped prepare for the diversion of natural gas supplies from around the world to Europe in the event that the flow from Russia is cut, in an effort to blunt Putin’s most powerful economic weapon.
US officials said on Tuesday that they had been negotiating with global suppliers and were confident that Europe would not suffer from a sudden loss of energy for heating in the middle of winter.
“To ensure Europe is able to make it through the winter and spring we expect to be prepared to ensure alternative supplies covering a significant majority of the potential shortfall,” a senior official said.
The preparation for bulk gas deliveries is part of a campaign by the US and its European allies to show a united and coherent front to Putin. Boris Johnson hinted that Germany was concerned about the imposition of sanctions against Russia because of its dependence on Russian gas and told MPs diplomatic efforts were being made to persuade Berlin and others to go further.
The British prime minister said that “European friends” had concerns about imposing the toughest possible sanctions on Moscow because of their “heavy dependence” on Russian gas – and also declared the UK would be willing to deploy more troops to eastern Europe if Ukraine was attacked.
His comments came as the French president, Emmanuel Macron, and Olaf Scholz, the new German chancellor, met in Berlin on Tuesday to coordinate their stances after reports of rifts among the allies.
Macron said he was due to speak by phone with Putin on Friday to “clarify” the Russian position. He said France and Germany would never abandon dialogue with Russia, but added: “If there is aggression, there will be retaliation and the cost will be very high.”
The Russian military announced it would carry out a new set of military exercises involving 6,000 troops near the Ukrainian border, and within Crimea, the Ukrainian peninsula that Moscow annexed in 2014. The drills would include exercises with live ammunition and feature fighter jets, bombers, anti-aircraft systems and vessels from Russia’s Black Sea and Caspian fleets, the defence ministry said.
Ukrainian leaders called for calm, with the defence minister, Oleksii Reznikov, telling parliament that an invasion was not imminent. He said the Russians had yet to form a combat battle group of the sort it would need, and “as of today, there are no grounds to believe” Russia would invade imminently.
“Don’t worry, sleep well,” he said. “No need to have your bags packed.”
Russia has already restricted the flow of natural gas through the pipeline running through Ukraine from about 100m cubic metres a day to 50m, US officials have said. Washington estimates that almost all of that can be replaced quickly if the pipeline is cut deliberately or as a result of conflict. If gas were to be diverted to Europe it would largely have to be in the form of liquified natural gas (LNG), but at present the entire global market in LNG would not be sufficient to make up the shortfall.