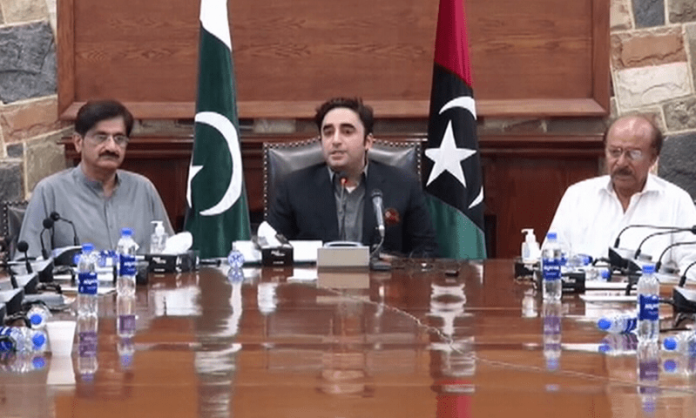 Foreign Minister Bilawal Bhutto Zardari on Wednesday called for putting politics aside and prioritising collective efforts to address the flood catastrophe that has befallen the country.

Without naming PTI chairman Imran Khan, the minister criticised the politicking in “the other half of the country” — referring to his preparations for a long march redux — and said there “cannot be two Pakistans where one part is submerged while the other has someone playing politics”.

Latest data and estimates show nearly 1,700 people have been killed in the floods and their aftermath caused by heavy monsoon rains and melting glaciers. The floods have affected more than 33 million people — half of them children, the minister said.

Thousands more have been displaced and the United Nations has sounded the alarm on the rise of water-borne diseases in the country, particularly among the flood-hit population.

The government estimates the cost of the damage at $30 billion, and both the government and UN have blamed the catastrophe on climate change.

Addressing a press conference in Karachi, Bilawal said that water was still entering Sindh from the mountains of Balochistan.

He said that the country had come together in the aftermath of the 2010 floods and tackled the crisis collectively. “Politics will continue but this calamity has to be dealt with collectively.”

He also appealed to all political parties to “hit the pause button” and devote their time and energy to helping flood victims.