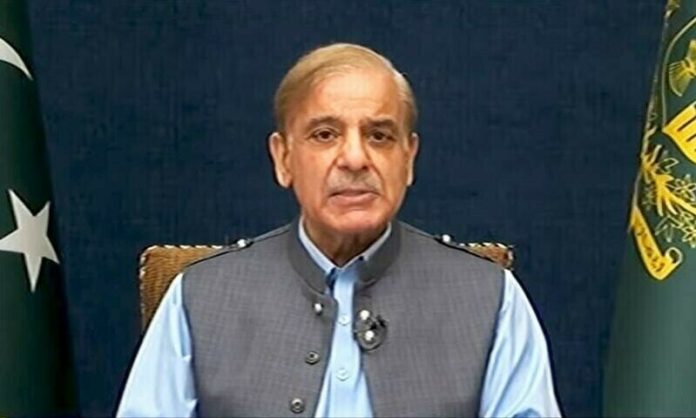 Prime Minister Shehbaz Sharif has said Pakistan should not be forced to go to rich polluting nations with “a begging bowl” in the aftermath of the catastrophic flooding which has affected nearly a third of the country.

Latest data and estimates show nearly 1,700 people have been killed in the floods and their aftermath caused by heavy monsoon rains and melting glaciers.

Thousands more have been displaced and the United Nations has sounded the alarm on the rise of water-borne diseases in the country, particularly among the flood-hit population.

The government estimates the cost of the damage at $30 billion, and both the government and UN have blamed the catastrophe on climate change.

In an interview published in The Guardian on Thursday, PM Shehbaz said he would be seeking “climate justice” from the international community.

He went on to say that Pakistan was facing an unprecedented crisis of health, food security and internal displacement after the “apocalyptical” monsoon rainfall.

With Pakistan contributing marginally to global carbon emissions, the premier said it was the “responsibility of the developed countries, who caused these emissions, to stand by us”.

“I’ve never seen this kind of devastation, inundation and suffering of our people in my lifetime. Millions have been displaced, they have become climate refugees within their own country.”

PM Shehbaz said that while the global community had pledged funds and aid, it was “not enough”.

“The enormity of this climate-induced catastrophe is beyond our fiscal means,” he told the publication. “The gap between our needs and what is available is too wide and it is widening by the day.”

However, the premier made it clear that he was talking about “climate justice”.

“We are not blaming anybody, we’re not casting allegations, what we are we saying is this is not of our making but we have become a victim. Should I be asked to cast my appeal into a begging bowl? That is double jeopardy. That’s unjust, unfair.”

Commenting on the support from world leaders, PM Shehbaz said that while he was grateful for the “very touching words and statements”, it was “all very fine but more important is practical demonstration of these statements into action”.

“While they are doing a very good job, and we appreciate it, this is not enough. They must come forward with a far better and a far bigger plan to rescue us and rehabilitate us and put us back on our footing.”

He also pointed out the unfulfilled promise made by rich nations over a decade ago to commit $100bn a year to a climate fund for developing nations at the forefront of the climate crisis.

“Where’s that money? It’s high time that we question and remind these countries to fulfil their commitments and pledges they have made.”

“We’re not asking about reparations,” he went on to say. “No, we’re not. I don’t think talk of reparations is proper at this point in time. What I am saying is that they should take notice of the situation, take responsibility and act speedily before it’s too late, before the damage becomes irreparable — not just for Pakistan, but for the world.”

Earlier this week, the UN revised up its humanitarian appeal for Pakistan five-fold, to $816 million from $160m, as a surge of water-borne diseases and fear of growing hunger posed new dangers after weeks of unprecedented flooding.

Tedros Adhanom Ghebreyesus, director general of the World Health Organisation (WHO), said on Tuesday Pakistan was “on the verge of a public health disaster”.

“The water has stopped rising, but the danger has not, we are on the verge of a public health disaster. Many more lives than were lost in the floods could be lost in the coming weeks if we don’t mobilise greater support for Pakistan,” he said.