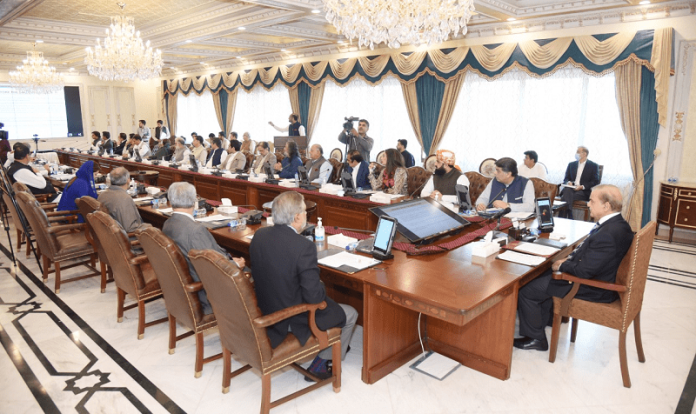 US cypher
Qureshi says PTI ‘not afraid’ of probe | Imran terms issue of missing cypher copy a ‘new drama’
ISLAMABAD
The federal cabinet has issued a formal approval to pursue legal action against Pakistan Tehreek-e-Insaf (PTI) chief Imran Khan and his party leaders regarding the ‘cipher’ audio leaks, it was reported on Sunday.
The Federal Investigation Agency (FIA ) was given a nod of approval by the cabinet to investigate the ‘diplomatic cipher’ audio leaks, wherein the former government high-ups allegedly discussed how would they “play” on the cipher issue.
A cabinet committee was constituted on September 30 to discuss the proceedings regarding the audio leaks featuring the PTI chairman and his party leaders, including General-Secretary Asad Umar, then personal secretary Azam Khan and Vice Present Shah Mahmood Qureshi.
The committee recommended legal action in a meeting held yesterday, with proposals presented in the form of a summary before the cabinet for approval.
“This is a matter of national security which could have possible adverse effects on the country’s interest,” the cabinet committee stated in a notification, adding that legal action was “necessary” and the FIA should form a committee comprising senior officials to probe the matter.
“FIA team should take action against offenders as per law,” the committee recommended in the summary.
The former ruling party has been at the center of criticism after the recently-surfaced audio leak purportedly revealed a conversation between Imran Khan, Asad Umar, Azam Khan and Shah Mahmood Qureshi discussing the much-touted “threat cipher” ratcheting up the controversy around the steady drip of damning leaks allegedly offering a glimpse of the inside story.
The 1.09-minute-long audio emerged on social media and featured a conversation purportedly between Imran Khan, Shah Mahmood Qureshi, Asad Umar and Azam Khan about a strategy to set the stage for a narrative around the Cablegate affair.