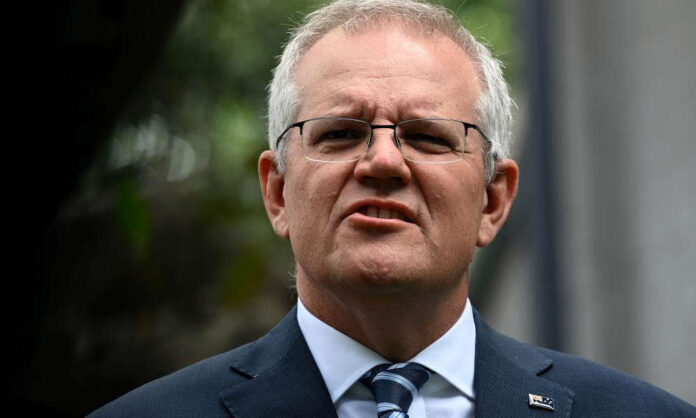 The prime minister, Scott Morrison, has confirmed Australian officials will not attend the Beijing Winter Olympics, joining the United States in a diplomatic boycott of next year’s Games and prompting accusations from Beijing of political posturing.

Morrison told reporters in Sydney it was “not surprising”, given the deterioration in the diplomatic relationship between Australia and China, that officials would not attend next year’s winter Games.

“Australian athletes will, though,” he said on Wednesday. “Australia’s a great sporting nation and I very much separate the issues of sport and these other political issues.”

Morrison said he would like to see longstanding tensions between Australia and China resolved, but his government did not intend to “step back from the strong position we had standing up for Australia’s interest”.

Confirming the diplomatic boycott, Morrison raised human rights abuses in Xinjiang as one of the factors Australia had “consistently raised”. He said the Chinese government had not made itself available to talk through Australia’s concerns about human rights.

The Chinese embassy in Canberra accused Australian politicians of “political posturing” and suggested – as it did in response to the US boycott – that the diplomatic representatives weren’t necessarily invited anyway.

“Australia’s success at the Beijing Winter Olympics depends on the performance of Australian athletes, not on the attendance of Australian officials, and the political posturing by some Australian politicians,” the embassy said on Wednesday.

It did not mention human rights or other issues raised by those proposing boycotts, instead calling on Australia to take “practical measures” to improve bilateral relations, saying all blame for the “current predicament” lay squarely with Australia.

The prime minister was earlier asked whether he expected any retaliation from China in response. Morrison said any reprisals would be “completely and utterly unacceptable and there would be no grounds for that whatsoever”.

Australia remained open to dialogue with China “whether it’s their concerns with our foreign interference legislation or foreign investment rules”. But he repeated that Australia would continue to pursue policies in the national interest.

The New Zealand government said on Tuesday it would not send diplomatic representatives at a ministerial level to the Winter Olympics, citing “a range of factors but mostly to do with Covid”.

The Biden administration has also confirmed that the US will pursue a diplomatic boycott. The White House press secretary, Jen Psaki, cited China’s “ongoing genocide and crimes against humanity in Xinjiang and other human rights abuses”.

That decision drew a furious reaction from the Chinese government, which flatly denies crimes against humanity or any wrongdoing in Xinjiang, and accused Washington of “posturing and political manipulation”. Senior officials sought to dismiss the boycott by saying the US representatives hadn’t been invited anyway, but state media also reported Beijing had made “stern representations” to the US.

China’s foreign ministry spokesperson, Zhao Lijian, had warned of unspecified “countermeasures”. Asked to elaborate at a regular press conference on Tuesday Zhao said only that the US would “pay a price for its erroneous actions” and observers “may wait and see”.

“This decision, alongside other countries’ diplomatic boycotts, sends a strong signal that these are not the behaviours of a responsible global power,” they said, adding that it was “appropriate” athletes were not being asked to make the sacrifice.

“Our athletes have trained hard for years towards this opportunity and didn’t choose where the Winter Olympics are being held.”

The Australian Olympic Committee responded to Morrison’s announcement, saying it respected “the fact that diplomatic options are a matter for government and that politics and sport should be separated”.

“Our Australian athletes have been training and competing with this Olympic dream for four years now and we are doing everything in our power to ensure we can help them succeed,” said the committee’s chief executive, Matt Carroll.

“Human rights are extremely important, but the considered view of diplomats is that keeping channels of communication open is far more impactful than shutting them down.”

“Australia should now redouble efforts with likeminded governments to investigate and map out pathways to accountability for those responsible for these crimes and justice for the survivors.”

The diplomatic boycotts of the Olympics come amid broader calls for government and commercial boycotts of the Games over the Chinese government’s human rights abuses, while the Women’s Tennis Association has taken the unprecedented step of cancelling all 2022 tournaments in China over its concerns for the wellbeing of the tennis player Peng Shuai. Peng was not seen for more than two weeks after she accused a senior Chinese official of sexually assaulting her.

The International Olympic Committee, which had faced scrutiny over its stated preference for “quiet diplomacy” in response to the case of Peng, said on Tuesday it respected the US’s boycott decision.