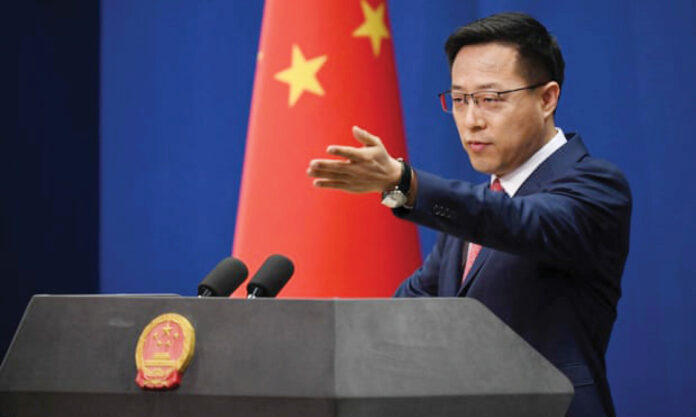 Beijing says FT report was inaccurate and that exercise was merely a test of reusable technology
Beijing
China has denied a report that claimed it had recently launched a hypersonic missile, saying its launch of a new spacecraft was merely a test to see whether the vehicle could be reused.
The Financial Times reported on Saturday that Beijing had launched a nuclear-capable missile in August that circled the Earth at low orbit before narrowly missing its target. Citing multiple sources, the FT claimed the hypersonic missile was carried by a Long March rocket and that the test had been kept under wraps.
But Beijing said on Monday the report was inaccurate, and the exercise was a test of reusable technology that could reduce the cost of launching spacecraft.
“According to my understanding, this test is a routine spacecraft test, used to test a reusable spacecraft technology,” Chinese foreign ministry spokesman Zhao Lijian told reporters in a regular press briefing. “This could provide a convenient and cheap way for humans to use space for peaceful purposes.”
Zhao’s comments came days after China launched a second three-person crew to staff its space station on a six-month mission. The FT report came at a sensitive time, as China’s relationship with the US continues to deteriorate, with some commentators saying recent developments were reminiscent of those during the cold war between the Soviet Union and the west in the 20th century.
The reported launch of a hypersonic missile puzzled some observers in Washington. One US official told the FT: “We have no idea how they did this.” The FT report said Beijing’s progress in the field had “caught US intelligence by surprise”.
“The timing [of this reported launch] isn’t surprising at all,” said Tong Zhao, a senior fellow of the nuclear policy programme based at the Carnegie–Tsinghua Center for Global Policy in Beijing. “China is known to have been conducting research on new delivery technologies for some time. But even if this reported launch was a weapons test, it may be far from becoming an operational capability.
“If the FT report was true, it means that China is willing to go the extra mile with a exotic approach to penetrate the US’s missile defence,” he said, adding that the US had “long possessed a very similar and more sophisticated technology, such as the X-37B spacecraft”.
Drew Thompson, a former director for China, Taiwan and Mongolia in the Office of the Secretary of Defense in the US, said that the Department of Defense and the intelligence community have been monitoring and tracking China’s various missile programmes “for years”.
“Without transparency in China’s space programme, it is difficult to make credible denials,” he said. “I think Biden’s calculation [regarding China] changed a while ago. This just reinforces the conclusions.”
Along with China, the US, Russia and at least five other countries are working on hypersonic technology.
Hypersonic missiles can fly at more than five times the speed of sound and like ballistic missiles can deliver a nuclear warhead. But ballistic missiles fly high into space in an arc to reach their target while a hypersonic flies on a trajectory low in the atmosphere, potentially reaching a target more quickly.
Crucially, a hypersonic missile is manoeuvrable – making it harder to track and defend against.
Countries including the US have developed systems to defend against cruise and ballistic missiles, but their ability to track and take down a hypersonic missile remains in question.
China has been aggressively developing the technology, according to a recent report by the US Congressional Research Service.