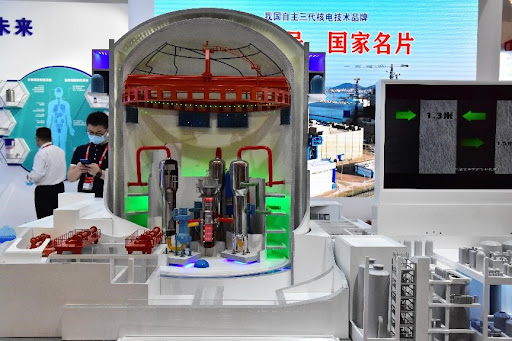 In recent years, China has attached great importance to enhancing the strength of indigenous brands and ramped up efforts to accelerate the shift from “Made in China” to “Created in China” and from “Chinese products” to “Chinese brands.”

Chinese brands have delivered eye-catching performance in both international and domestic markets this year. A total of 143 Chinese companies entered the 2021 Fortune Global 500 list, making China top the ranking.

During this year’s Singles’ Day shopping festival in China, the volume of transaction of more than 100 domestic brands on China’s e-commerce giant JD.com surged over eight times year on year, while China’s leading search engine Baidu witnessed the greatest increase in the number of domestic products-related searches in nearly three years.

More and more Chinese enterprises have built their brands and improved their core competitiveness by making innovations, creating such important products as a smart jacking platform that is the first of its kind in the world, the world’s largest rectangular shield tunneling machine, and the world’s thinnest stainless steel foil.
Many Chinese brands have changed their development ideas and started to explore the path of collaborative innovation.
Leading Chinese home appliance brand Galanz has joined hands with American household appliance brand Whirlpool, through which the two home appliance giants are expected to further enhance their mutual complementarity and generate more fruits of innovation.

At the 130th China Import and Export Fair, commonly known as the Canton Fair, held in October this year in Guangzhou, capital of south China’s Guangdong province, they exhibited a solution to whole-house smart home appliances.

Galanz has established research and development (R&D) centers and branches in more than 10 countries around the world. Its products have been sold to nearly 200 countries and regions.
In January this year, China’s first nuclear power unit using Hualong One, a domestically-designed third-generation nuclear reactor, entered commercial operation, a result of nearly 20 years of hard work of the R&D team of China National Nuclear Corporation.

Thanks to its achievements in nuclear power technology represented by the Hualong One nuclear reactor, Karachi Nuclear Power Plant Unit-2 (K-2) in Pakistan, and the high-temperature gas-cooled reactor of Shidaowan nuclear power plant in east China’s Shandong province, China has become one of the frontrunners in the field of the third-generation and the fourth-generation nuclear power technologies this year.
China’s homegrown sportswear brand Anta is intensifying efforts to build an integrated warehousing and distribution network using both online and offline means. On the one hand, by promoting the application of digital technologies in logistics services, the company has improved user analysis and managed to realize precise distribution of inventory. On the other hand, it has widely used automatic guided vehicles (AGVs) and other emerging machines and systems offline, raising the efficiency of parcel sending by 30 percent.
During this year’s Singles’ Day shopping festival, Anta sent off more than 13 million parcels and offered better shopping experiences to consumers by leveraging smart logistics.

Quality is the lifeblood of brands. Ensuring quality safety and improving the level of quality is an important precondition for the high-quality development of Chinese brands.