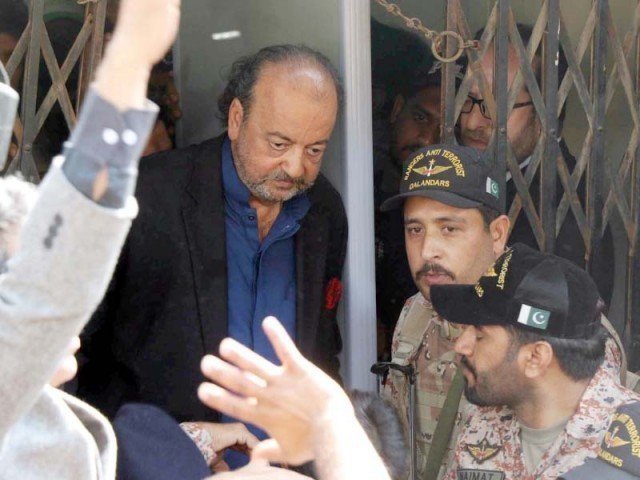 ISLAMABAD
An accountability court in Islamabad has accepted Sindh Assembly Speaker Agha Siraj Durrani’s two-day transit remand on the National Accountability Bureau’s request.
AC Judge Bashir heard Mr Durrani’s case on Saturday. The NAB prosecutor told the court that the Sindh Assembly speaker would be presented before the Karachi accountability court on Monday.
The prosecutor requested the court for the grant of a two-day transit remand of Mr Durrani which was accepted. He informed the court that his arrest warrants were already issued and he would be shifted to Karachi as soon as the first flight would be available to the city.
The judge asked Mr Durrani if he wanted to say anything. The speaker replied he wanted to reach Karachi as soon as possible. While talking to media, Durrani said imprisonment was not new to him and he had already spent time in jail. To another question of a journalist as to why did he opt to be arrested from Islamabad instead of Karachi, Mr Durrani quipped he was very fond of travelling in an aeroplane.

Sindh Assembly Speaker Durrani on Friday surrendered to the NAB after
the Supreme Court ordered him to do so. The NAB team took Mr Durrani
into its custody from outside the apex court building in Islamabad
yesterday afternoon.

Justice Mansoor Ali Shah remarked that the apex court could not hear Mr
Durrani’s case unless he complied with the SHC order first. He said when
the SHC rejected his bail, he should be in jail.

“Why Mr Durrani didn’t surrender. Why should we give him a special
concession,” Justice Shah asked Mr Durrani’s lawyer.

The apex court also rejected Mr Durrani’s lawyer plea that the speaker
should not be arrested from the court premises. DNA