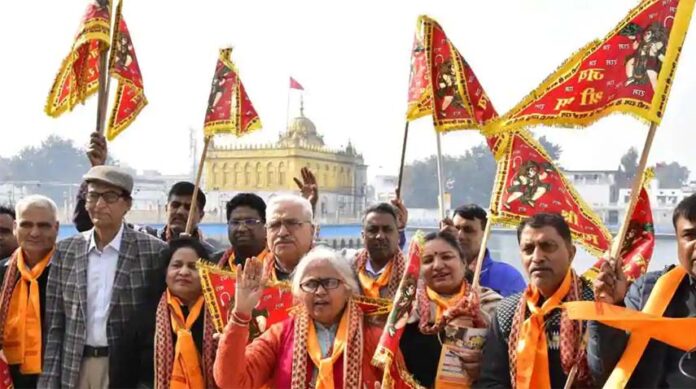 three-day annual festival
LAHORE
A total of 136 Hindu pilgrims have arrived in Lahore through Wagah border crossing, to participate in 313th birth anniversary celebrations of Sant Shadaram Sahib at Mirpur Mathelo district of Sindh.
Upon their arrival, Evacuee Trust Property Board Deputy Secretary General, Faraz Abbas warmly welcomed the pilgrims at the border.
Speaking on the occasion, Yudhister Lal, who led the Hindu Pilgrims, expressed his satisfaction over the arrangements made by the government of Pakistan to facilities the visiting Hindu pilgrims.
As many as 136 Hindu pilgrims from India have been issued Pakistani visas to visit their religious sites in the country.
According to details, the pilgrims will participate in the 313th birth anniversary celebrations of the Hindu saint Shiv Avtari Satguru Sant Shadaram Sahib.
The three-day annual festival from 14 December will take place at the Shadani Darbar Hayat Pitafi in the Ghotki district of the Sindh province. The Hindu pilgrims will return to India on December 15.
Shadani Darbar, founded by Sant Shadaram Sahib in 1786, is a sacred place for Hindu devotees across the globe. “Issuance of pilgrimage visas to Hindu & Sikh pilgrims is in line with the Government of Pakistan’s efforts for facilitating visits to religious shrines,” the high commission said in a statement.
“It’s also reflective of Pakistan’s respect for religious places of all faiths and efforts for promoting interfaith harmony.”
This is not the first time that Pakistan has issued visas to Indian pilgrims despite the same has not been reciprocated from the other side.
Last month, the Pakistan High Commission in New Delhi had issued around 3,000 visas to Indian Sikh pilgrims to participate in Baba Guru Nanak’s 552nd birth anniversary celebrations in Kartarpur.