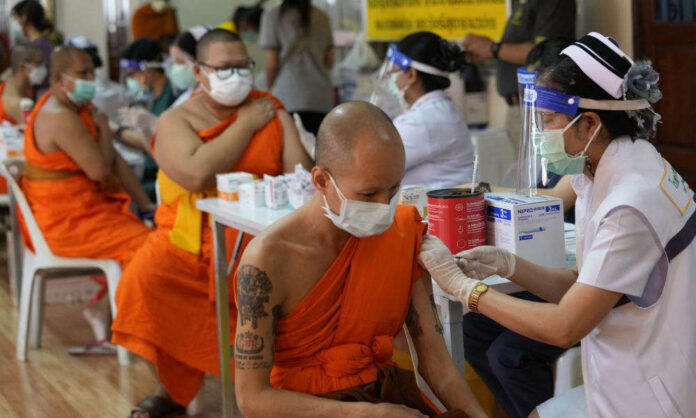 South Korea is struggling to contain a surge in Covid-19 cases, reporting 7,456 infections on Wednesday and a record number of people with serious symptoms, as countries across Asia face a similar battle.

The new infections bring South Korea’s total to 583,065, while the Korea Disease Control and Prevention Agency said the number of critically ill patients rose to a new high of 1,063.

It is placing intense pressure on medical services, prompting the prime minister, Kim Boo-kyum, to commit to securing an additional 10,000 hospital beds for patients with moderate to serious symptoms by the middle of next month, the Yonhap news agency reported.

South Korea now requires citizens over 18 to present a quarantine pass, proof of Covid vaccination or negative PCR test to access indoor sports events, cinemas and concert halls. Other new restrictions include social distancing measures that will last until at least 2 January, limiting gatherings to no more than four people and forcing restaurants, cafes and bars to close by 9pm.

Neighbouring Japan has decided to extend strict border controls “for the time being”, the prime minister, Fumio Kishida, said despite criticism from students waiting to take up university places and families who say they have been unfairly separated by the restrictions. Kishida had originally said those measures would stay in place until early January.

Japan is recording comparatively few daily cases, but Kishida warned of the need to remain vigilant, speed up the booster rollout and promote the use of orally administered Covid-19 drugs, the Kyodo news agency said.

Currently only citizens and foreign residents are permitted to enter Japan, and they must quarantine in government-designated facilities.

Thailand reported 2,532 new coronavirus cases and 31 deaths on Wednesday, according to the ministry of health. It will reinstate mandatory Covid quarantine for foreign visitors and scrap a quarantine waiver from Tuesday, Reuters reported. The move was confirmed by the government, which said the action was being taken due to concerns over the spread of the Omicron variant.

China, where the pandemic began two years ago, is fighting local outbreaks in several cities, including key industrial hubs in the east and south. Authorities are determined to quash fresh outbreaks ahead of a crucial few weeks that include the Beijing Winter Olympics in February and a surge in domestic travel during the lunar new year.

China’s health authority reported 77 new confirmed cases on Tuesday, down from 81 a day earlier. Of the new infections, 57 were locally transmitted, according to a statement by the National Health Commission, and mostly in the north-western province of Shaanxi.

The Philippines has halved the waiting time for a Covid-19 vaccine booster to three months after a second vaccination, in an attempt to prevent the spread of the Omicron variant. “We are exploring all possible options to safely mitigate the effects of more transmissible variants of Covid-19,” said the health secretary, Francisco Duque.

The Philippines has received more than 192m doses of Covid-19 vaccines and fully inoculated about 44.2 million of its 110 million population, according to the government. Covid-19 cases have fallen to an average of 378 a day in December, from a peak of 18,579 daily in September, and the country has so far detected three imported cases of the Omicron variant.

The new variant is also present in Singapore, where authorities have discovered three Covid-19 cases linked to a gym, with two of them being Omicron, according to a report citing preliminary tests.

All three people were fully vaccinated and had mild symptoms, the health ministry said, adding that it was attempting to trace contacts. Singapore has so far detected 71 confirmed Omicron cases, with 65 imported and six local.

Indonesia has recorded 4,829 cases and 11 deaths in its latest reporting period, bringing its total caseload to 4.26 million with 144,024 deaths, according to government health data. A total of 73.4% of eligible people have received at least one Covid vaccine dose and 51.8% have received two doses.

On Monday, Indonesia added people traveling from Britain, Norway and Denmark to the list of those banned from entering the country, while Hong Kong was removed, senior minister Luhut Binsar Panjaitan said, according to Reuters. Indonesia identified its first case of the Omicron variant last week.