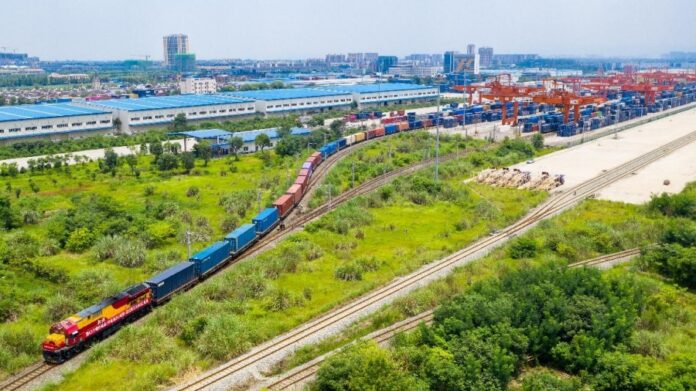 Beijing
The Belt and Road Initiative (BRI) has yielded fruitful results over the past eight years since it was proposed. From 2013 to September 2021, the cumulative value of trade in goods between China and countries participating in the BRI amounted to $10.4 trillion.
The proportion of the volume of trade in goods between China and BRI countries in the country’s total foreign trade volume increased by 4.1 percentage points from 2013 to 2020.
Recently, multinational electronics company TCL Technology put into operation its subsidiary which just settled in the comprehensive bonded zone of Chengdu International Railway Port in Chengdu, capital of southwest China’s Sichuan province.
“The efficient logistics services provided by relevant departments make us more confident about the development of our business,” said Sun Xiuhong, an executive in charge of TCL Technology’s manufacturing base in Chengdu.
Chengdu has become an important manufacturing export base of TCL Technology for expanding its business in countries along the routes of the BRI, according to Sun, who disclosed that more than 90 percent of the components and parts used in the six production lines of TCL Technology’s assembly base in Poland are transported by China-Europe freight trains from Chengdu.
China-Europe freight trains have formed a grand channel for international trade spanning the Eurasia. As of the end of October 2021, a total of 73 routes of China-Europe freight trains had been launched, linking China with 175 cities in 23 European countries, and more than 46,000 trips had been made by China-Europe freight trains.
The unimpeded international logistics has facilitated trade. During the past eight years, trade cooperation between China and BRI countries has continuously scaled new heights, and BRI countries have become China’s important trading partners.
In the first ten months of this year, China’s foreign trade volume with BRI countries amounted to 9.3 trillion yuan (about $1.46 trillion), surging 23 percent year on year. During the period, the country’s volume of exports to BRI countries climbed 21.9 percent from the same period last year to 5.27 trillion yuan, while its imports from these countries rose 24.5 percent year on year to 4.03 trillion yuan.
On Nov. 17, customs officers inspected a batch of cross-border e-commerce packages for export at the comprehensive cross-border e-commerce pilot zone in Hangzhou, capital of east China’s Zhejiang province. After passing customs inspections, these goods were transported to Hangzhou Xiaoshan International Airport in Xiaoshan district of Hangzhou and then to Belgium by a cargo flight dedicated to cross-border e-commerce.
These packages were transported to a cargo transshipment hub in Liege, Belgium, and then quickly distributed to surrounding countries, noted Zhu Zekun, manager of the business department of Zhejiang Ueasy Business Service Co., Ltd., a provider of comprehensive services for foreign trade companies.
“Buyers in foreign countries usually receive their packages sent from China five days after they place order on e-commerce platforms,” said Zhu.
The rapid development of new business forms and models in trade, in particular, cross-border e-commerce, market procurement trade, and overseas warehouses, have provided new possibilities of business expansion in BRI countries for more small and medium-sized foreign trade enterprises, lowered the threshold for trade, and stimulated driving forces of the high-quality development of foreign trade.

Iran says diplomats back in Saudi for OIC posts