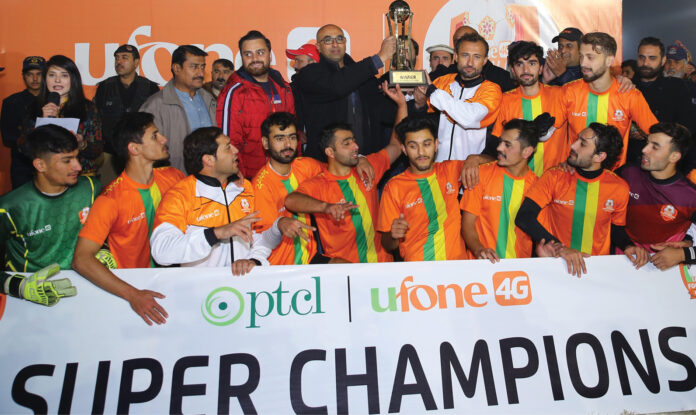 Peshawar
Two formidable footballing sides, DFA Chitral and Muslim Club Chaman clashed for glory at a jam-packed Tehmas Khan Football Stadium Peshawar in the Super Final of Ufone 4G Football Cup 2021 on Sunday.
DFA Chitral defeated Muslim Club Chaman to clinch the title. DFA Chitral and Muslim Club Chaman had earlier emerged as champions of their respective regions in Khyber Pakhtunkwa and Balochistan legs of the tournament.
The super final match was played under floodlights, a day after the final of Khyber Pakhtunkwa leg of the tournament where an experienced Chitral team downed Mardan to clinch victory and to qualify for the grand finale against Muslim Club Chaman.
The two sides enjoyed extensive national and international experience and were powered by extremely talented footballers.
Owing to the gigantic support base in Peshawar, DFA Chitral enjoyed a near home-ground advantage, which coupled with its effective strategy and cohesive game plan, gave it early dominance over Muslim Club Chaman.
Chitral’s player Yousaf masterfully tackled a long range assist from fellow player Muhammad Rasul to send the ball into Muslim Club’s goalpost in the 11th minute.
Muhammad Rasul returned to capitalize on Ziaul Islam’s assist to score another goal in the 24th minute to solidify his team’s grip on the match.
Muslim Club Chaman seemed to have found its rhythm towards the end of the 1st half where it launched a couple of well-coordinated attacks on their opponent but failed to get past Chitral’s unassailable defenses.
The team then got a golden chance in form of a penalty in the 74th minute but failed to capitalize on the opportunity.
DFA Chitral dominated the match through maximum possession of the ball and continuous coordinated attacks, besides successfully preventing Muslim Club Chaman from orchestrating a comeback in the match.
The strategy worked out for Chitral, which lifted up the gleaming Super Champions trophy in front of the overjoyed crowd present to cheer for the team.
Head of Public Relations Ufone, Mr. Amir Pasha distributed cash prizes amongst the teams and handed over the Super Champions trophy to the winning team. DFA Chitral’s players and supporters celebrated their victory by dancing euphorically to traditional tunes.
The Super Final marked the end of the Ufone 4G Football Cup tournament that featured 140 teams and more than 2 thousand players from Khyber Pakhtunkhwa and Balochistan.
The tournament organized by Pakistani telecom company Ufone aimed to bring positive entertainment to people, nurture local footballing talent and provide an effective platform for youth development in the country.