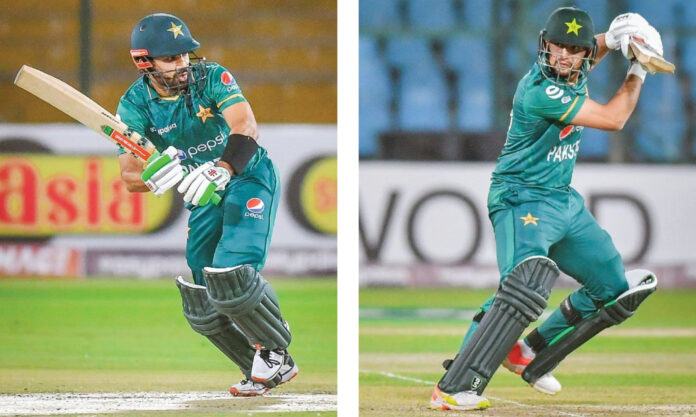 Pakistani batters, bowlers shine as Green Shirts beat West Indies by 63 runs
KARACHI
A dominating Pakistani side on Monday thrashed West Indies by 63 runs in the first fixture of the three-match T20I series at the National Stadium in Karachi.
After Windies’ captain Nicholas Pooran won the toss and put the Green Shirts to bat, Pakistan were able to put up a massive 200-6 total on the board despite losing early and intermittent wickets.
Pakistani bowlers were able to pick up quick wickets, with Shadab Khan taking three, Haris Rauf one, Mohammad Wasim four, Mohammad Nawaz one, and Shaheen Shah Afridi one.
Shai Hope (31) scored the most for the Windies, followed by Rovman Powell, who was able to contribute 23 runs to the West Indies total of 137-10.
Pakistan’s innings
Mohammad Rizwan and Haider Ali managed to pull off a much-needed partnership as they helped their team put up a total of 200 for the loss of 6.
Skipper Babar Azam was sent packing in the first over for a golden duck, Fakahar Zaman (10) was dismissed in the fifth over, as West Indies piled pressure on the Green Shirts.
However, Mohammad Rizwan helped Pakistan fight back as he built up a partnership with young Haider Ali (68). Both the batters made crucial half-tons — just when the team needed it.
In the 15th over, Rizwan was dismissed for an impressive 78, which he socred with the help of 10 fours. Ali was sent back to the pavilion in the last over, but he did the work which was required of him.
Mohammad Nawaz also performed well for his side as he scored 30 off just 10 balls, which included three 4s and two 6s.