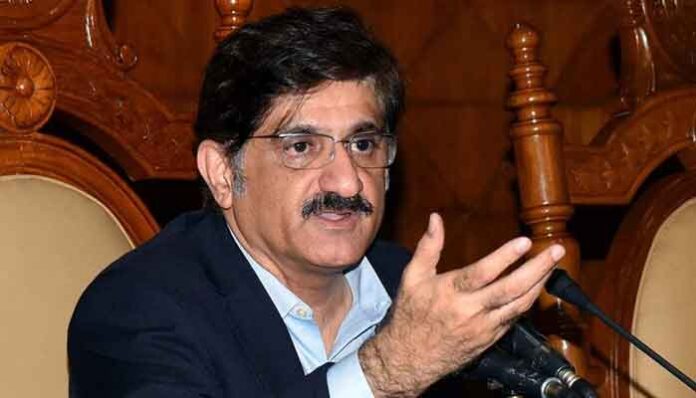 KARACHI – Sindh Chief Minister Syed Murad Ali Shah has said that his government is ready to talk to the opposition on Local Bodies Bill but if they [opposition] are interested in playing politics, making alliances, and filing cases let them do what they want but we are committed to strengthen local bodies.

This he said on Monday while talking to the media just after inaugurating the newly constructed building of My Home- Al Mustafa Trust Orphanage at Korangi.

Replying to a question, the chief minister said that his Local Government Minister Syed Nasir Shah had discussed the amendments with the opposition parties before bringing it in the cabinet and in the assembly.

“It was the opposition’s proposal that towns have been created in the city in place of DMCs and now they have started playing politics,” he said and added “we are ready to talk to the opposition if they have some solid suggestions to strengthen the local bodies law.

“The opposition has chosen to file cases and make political alliances against the bill- let them do it because they are not serious in developing the local bodies as strong institutions,” Mr Shah said.

Murad Ali Shah said that the educational institutions and health facilities have been taken away from the local bodies because they have failed to run them properly in the public interest but in their place, we have given them entire public health, all the municipal functions and have given them representation in other civic agencies.

To a question about the proposed ordinance for regularization of Illegal construction, the CM said it was aimed at protecting the investment of poor people who purchase the apartment/house in a building.

“If a builder builds a building in violation of rules and regulations, he should be penalized instead of penalizing the allottees,” he said and added that he felt sorry to see the statement of Sindh Governor Imran Ismail against the Ordinance which was against the norms and ethics. He added that as a Governor he should have recorded his observation on the summary sent to him instead of issuing statements.

Shah said that a similar law was already operating in the Punjab and when Sindh wanted to introduce such a law why this unnecessary hue and cry was being made.

Replying to yet another question, Murad Ali Shah said that President Asif Zardari and Chairman PPP Bilawal Bhutto Zardari have strengthened the party in Punjab. “Our votes have increased by seven times from 5000 in 2018 to 32,000 while the votes bank of the PML-N has decreased from 90,000 to 42,000,” he said and added PPP would show a powerful comeback in the Punjab in next elections.

Orphanage: Sindh Chief Minister Syed Murad Ali Shah addressing the inauguration ceremony of My Home- Al Mustafa Orphanage invited all the children living there to the CM house to have lunch with him. “I’ll invite all my cabinet members and they will meet with you, interact with you and have lunch with you,” he said, adding “You are our future and we would support you and groom you for future leadership.”

Mr Shah said that he was glad to be a part of the ceremony because it is for a cause that is close to his heart. “Being the Chief Minister of the province, my heart aches at the sad reality that there are around four million orphans in Pakistan,” he said and added in the past couple of decades, this number has highly increased due to natural disasters like earthquakes, floods, heavy rainfall, and massive killings due to terrorism and a heavy influx of refugees from neighboring countries.

The CM said that he was glad to see that Al-Mustafa Welfare Society was making serious efforts in this regard. “Rescuing the vulnerable orphaned children and giving them a home, education, good food and all the comforts of life is commendable,” he said and added he especially liked the idea of calling the orphanage as `My Home’ because this name would give the children a sense of ownership, warmth and security.

Murad Ali Shah was pleased and impressed by the performance of these little champs. “These children are our future and I hope to see them leading in different fields of life,” he said. He lauded the services of Al-Mustafa and Haji Hanif Tayyab’s services for humanity are praiseworthy.

Those who spoke on the occasion include Haji Naif Tayab and Javeed Ghori. Earlier, the chief minister unveiled the plaque to inaugurate the new building of the Orphanage. The chief minister visited the Old age Home and met with the senior citizens and interacted with them. = DNA