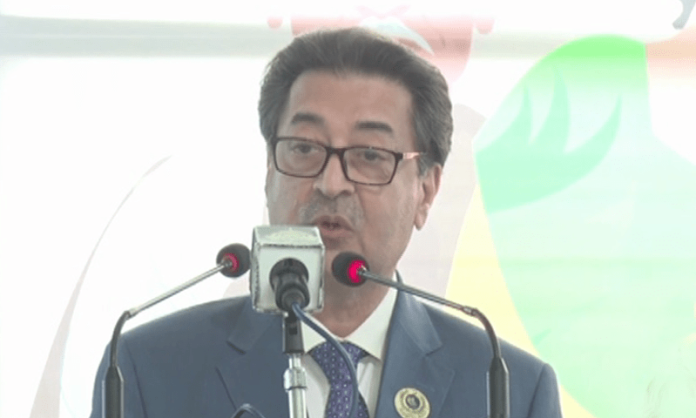 ISLAMABAD
Chief Election Commissioner (CEC) Sikandar Sultan Raja on Wednesday said the Election Commission of Pakistan (ECP) was under no pressure and was functioning independently sans having any favourites or adversaries.
Addressing the National Voters’ Day function, he said the Commission was taking decisions in accordance with the law of the land. A number of initiatives, including the introduction of modern technology, had been taken to make the ECP a modern institution.
The elements who resorted to lawlessness or committed irregularities during the electoral process were taken to task, he added. As a result of such steps, the confidence of people in elections, democratic process and the Commission had increased, Sikandar Raja said.
Transparency and accountability, he said, had been ensured in the Commission’s work. The code of conduct was implemented without any discrimination in the recent by-elections, and 16 out of 35 by-polls were won by the then opposition parties, he added.
The transparency in the by-elections was lauded by all, he said. The Commission, the CEC said, managed to hold local government elections despite reluctance shown by the respective provincial governments.
The LG polls in the Federal Capital would be held on December 31 and in the flood-hit areas of Balochistan on Sunday, while the second phase of municipal elections in Sindh was scheduled on January 15 (next year).
Sikandar Raja said the ECP fully backed the use of technology in the electoral process, but all the stakeholders should have a consensus in that regard. Such technology should be introduced, which should help the people exercise their right to franchise easily, besides ensuring the secrecy of the vote, he stressed.
He said the ECP was not opposed to the introduction of Electronic Voting Machines (EVMs) and voting rights for overseas Pakistanis. However, any decision taken in haste in that regard could make the whole electoral process suspicious, which, according to experts, might create anarchy in the country.
The software developed for the overseas Pakistanis to vote was also reportedly unreliable, he added.
The CEC said the Commission was planning to use the EVMs on an experimental basis during the next elections to ascertain their feasibility. It had also made arrangements for the printing of ballot papers and other material within its premises.
A new website having complete information for the public would be launched, while the ECP would also set up a modern data centre, he added. He said the ECP was planning to shift its offices to its own buildings. Some 29 plots had so far been purchased, including 18 in Punjab and 11 in Balochistan for the purpose.
He said a campaign was underway in 103 districts of Balochistan to encourage women to obtain Computerised National Identity Cards (CNICs). About 3.8 million women had been enlisted in the electoral rolls just in one year with the help of the National Database and Registration Authority (NADRA).
Sikandar Raja also distributed prizes among the winners of the painting competition titled “Your vote to a promising future”, organized by the Commission last month in connection with the National Voters Day.
Fatima Shakir got the first prize of Rs 100,000, while Zainab Rauf was given the second prize of Rs 50,000 prize and Zala Gul third prize of Rs 25,000.
Earlier, ECP Secretary Omer Hamid Khan, in his welcome address, said progress was possible through ballot. Regional offices of ECP has been linked with each other through fibre optic link.