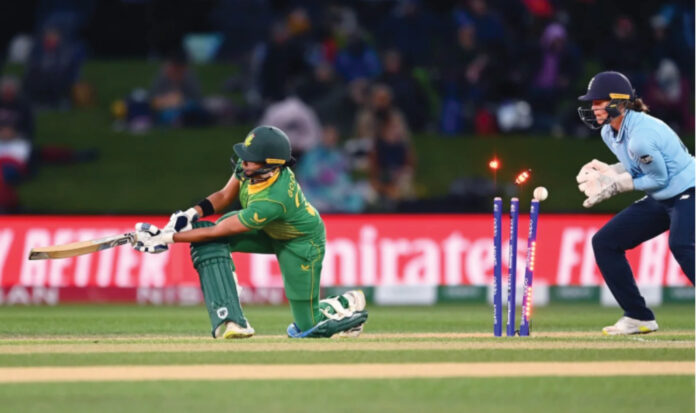 England will face Australia in final match
Christchurch
England on Thursday, won Women World Cup semi-final against South Africa.
England will face Australia in final match.
While playing first England team sat largest one-day international target of 293 on score board, which proved out of reach for South African team.
Danni Wyatt’s took full advantage of five catch drops to add 129 runs in the total, she faced 125 balls. Sophia Dunkley made 116 runs partnership on fifth wicket with Danni Wyatt to add measure of 60 in total. Amy Jones added 28 to the total, and Sophia Ecclestone rounded the inning with 24 runs in 11 balls only.
England lost 8 wicket to set largest history total in any Women ODI.
South African team rolled back to pavilion in 38 overs, when the total was only 156. Mignon du Preez was the highest scorer of Proteas to add 30 runs in total.
Other best batters were Lara Goodall and Sune Luus with 28 and 21 scores respectively.
Sophia Ecclestone was the best bowlers of England with 6 wickets against 36 runs while bowling 8 overs. After losing first three matches England was on the brink of elimination from the event, when they started eradicating error from the ball and field to won five to reach the final contest.
Now in final match of the event England will face the Australia. England captain Heather knight said this is the complete performance from them today and they were searching for. “The fact we hace played knockout cricket for the last four games has helped us as well”: Heather knight Talking about final she said “we’ll go into the final as underdogs but it’s a fresh slate, we are all equal in the morning of the game and what a story has been written for us if we can do it”. Proteas captain accepted that they did not have their best fielding that was the need of the day.
She said “We needed to be more clinical. It’s something we will keep working on but we have had a great campaign, we won’t be taking away from that.”