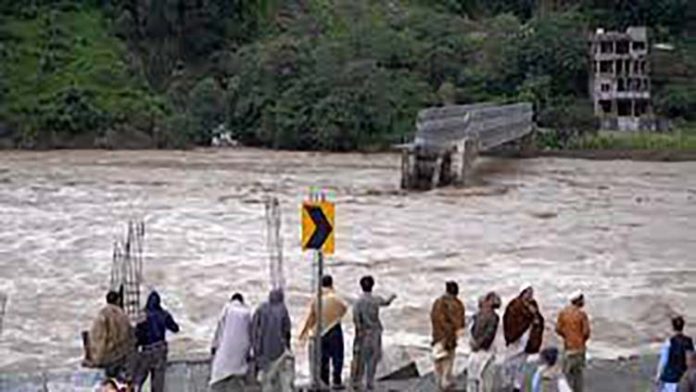 PESHAWAR : The unprecedented flash floods in the history of Pakistan had not only claimed losses of over 1,396 human lives and 12,728 injured besides damages to properties, infrastructure and agriculture sector across the country, had also inflicted about Rs1,820 million loss to fisheries sector in Khyber Pakhtunkhwa.
Destroying and damaging 6,674.7 kilometers long roads, 269 bridges and 1,743,345 houses in the country, the devastating floods that started from Mataltan and Kalam valleys in Upper Swat brought havoc to fisheries in Malakand and Hazara divisions where many government and private hatcheries as well as trout/carp fish farms were swept away by the gushing water.
Chitral, Dir Upper, Swat, Shangla, Kohistan and Manshera were among the worst affected districts where many fish hatcheries and trout farms were either damaged or destroyed and caused about Rs1.820 billion losses to government kitty, Director Fisheries KP Zuabir Ali told APP.
He said Swat was the worst hit district where Madain hatchery was completely destroyed, incurring about Rs250 million losses. According to reports, about 5,000 kilograms of trout fish of Madain were swept away by the natural calamity. “The floods devastation was immense and most of fish farms on Cheel road in Swat were either damaged or destroyed.”
Solathern hatchery in Swat was washed away by floods incurring Rs100 million losses while Rs1,000 million losses to 250 private fish farms were also reported.
In Chitral, he said the water channel of the government hatchery had been damaged causing about Rs10 million losses while three private fish farms were destroyed by the gushing water, which inflicted Rs12 million losses to farmers.
Zubair said the flood had brought havoc to the fishery sector in Upper Dir where a government hatchery was destroyed, inflicting Rs80 million losses to the provincial kitty. Similarly, approximately Rs80 million losses are estimated following destruction of 20 private fish farms in Upper Dir.
Sharing details about flood damages to the fisheries sector in Shangla district, the official said that a water channel of a government hatchery worth Rs10 million was damaged while nine private fish farms were washed away causing Rs36 million losses to fish owners.
The director fisheries said floods had hit hard fisheries sector in Kohistan where a hatchery nursery unit causing Rs100 million losses and eight private farms inflicting Rs32 million losses to farmers were destroyed.
In Manshera, he said 25 private fish farms were damaged causing Rs100 million losses while destruction of water channel of a government hatchery had cost Rs100 million losses.
He said prices of fish would likely increase in winter as fishlign and young stock of trout and different types of carp were washed away in the above affected districts.
Zubair Ali said a seven members high level committee under chairmanship of Deputy Commissioner of the respective district with members of communication and works department, public health engineering, irrigation department, local government, divisional M&E and representative of law enforcement agency has been constituted for restoration, rehabilitation and reconstruction of the government infrastructure and development projects of the flood affected areas of KP.
He said the committee would monitor and review the restoration, rehabilitation and reconstruction of development activities in flood hit areas and would submit a report to the Additional Chief Secretary, Planning and Development Department in 15 days.
Usman Ali, General Secretary Swat Trout Fish Farming Association told APP that out of 400 fish farms in Swat established near the embankment of Swat River and Canals fed by the glaciers water, around 229 were washed away by floods by inflicting around Rs250 million to Rs300 million losses. Usman said that his six trout fish farms in Mankiyal were also wiped out besides eleven others.
He said each trout fish farm in Swat contained around 10,000 to 15000 kilogram fish stock that was destroyed by the gushing water inflicting huge losses to farmers. He said production of trout fish to other cities of the country were affected after the flash floods.
Usman said the natural calamity has hit the fishery sector very hard in devastated Kalam where hundreds of workers were made jobless after destruction of their fish farms.
He said revival of fish farming, which was providing jobs to thousands of people in KP, was a big challenge and urged the government to provide interest free loans to the affected farmers for rebuilding of their fish farms.
Besides fish farming, official sources in KP Agriculture Department told APP that the flood had also affected agriculture and livestock sectors in Khyber Pakhtunkhwa where 20,719 animals were washed away out of total 750,223 affected animals in the country.
The standing crops on 74,000 acres have been affected in Khyber Pakhtunkhwa with an estimated loss of Rs12.7 billion besides damaged watercourses in floods hit districts including DI Khan, Nowshera, Charsadda and Swat.
Inflicting about Rs300 million to infrastructure of the directorate of agriculture extension and Rs1.5 billion to the soil conservation projects, the floods also affected the beekeeping sector in KP where many bees boxes were washed away by the gushing water.