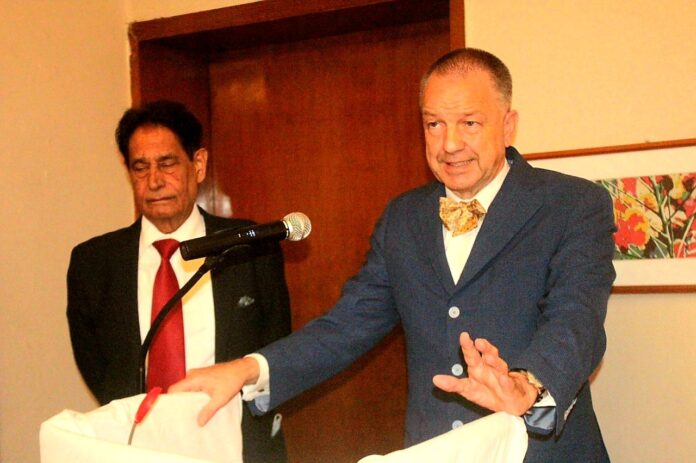 Islamabad – Ambassador of Germany H.E Bernhard Schlagheck has appreciated the start of trade between Pakistan, Uzbekistan and Azerbaijan and said that the present volume of trade between Pakistan and the regional countries is still nominal. it can be enhanced according to the real potential these countries have.
He was addressing to a selected gathering of members of English Speaking Union that was hosted by Mr. and Mrs. Khalid Malik , the president ESU in Islamabad .
German Ambassador was guest of honor at this occasion. General Secretary ESU Mr. Abid Malik was also present. The participants included former ambassadors, bureaucrats, businessmen and civil society.
Khalid Malik in his welcome address introduced the union and its working in Pakistan. He apprised the participants about the diplomatic career of the ambassador.
The Ambassador in his keynote address shed light on history of bilateral relations and specially mentioned that both countries are celebrating 70 years of diplomatic ties this year.
H.E Bernhard Schlagheck said that Pakistan is important partner of Germany. My country is one of the biggest trade partners of Pakistan and the balance of trade is in Pakistan’s favor.
Regarding 70 years, he shared that both countries are working on further strengthen bilateral relations in all spheres .
“My counterpart in Germany Dr Mohammad Faisal is also doing his efforts.” He noted.
The ambassador recalled visits of COAS Pakistan general Bajwah and Foreign Minister Shah Mehmood to Germany this year. German foreign minister also visited Pakistan few weeks ago.
Ambassador was sure that the future of bilateral relations is bright. He mentioned more than 7 thousand Pakistani students are studying in German universities.
“They are a strong bridge between the governments and people of both countries.” Ambassador concluded.
Here it is worth mentioning that the Ambassador of Germany is very close to oriental culture and literature. He specially described the work of Iqbal and research of Goethe Institute in this regard.

Who Is Zalmay Khalilzad? Biden’s Envoy for Afghanistan Resigns After Messy...