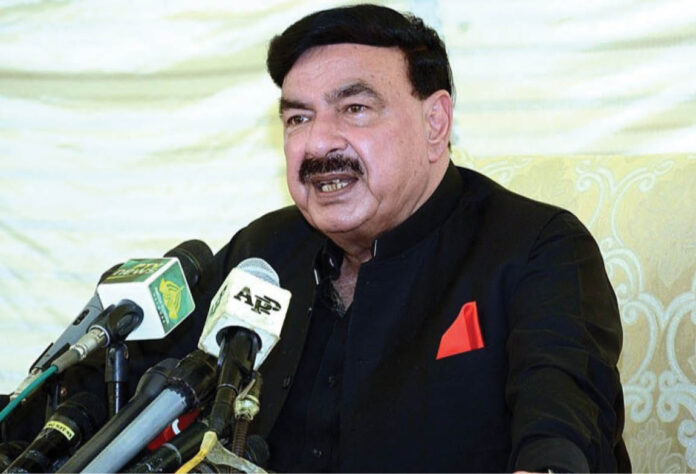 Interior Minister Sheikh Rashid Ahmed has said that government would deal opposition parties strictly if the opposition takes law into its own hands.
Addressing a press talk on Saturday, the interior minister said that thousands of lives were sacrificed during the war on terror. “After Johar Town, a terrorist incident took place in Anarkali after which the Interior Ministry has issued an alert to all the agencies” he told reporters.
Talking about investigations of the recent Lahore blast, Sheikh Rashid claimed that investigating agencies had reached out to the accused and said that he would defeat terrorism.
“The Interior Ministry has issued alerts to all forces and they are vigilant. Conditions tabled by TTP were unacceptable and the TTP itself ended the ceasefire” he said, while briefing media about negotiation talks with the banned Tehreek-e-Taliban Pakistan (TTP).
Regarding speculations about Presidential system in the country, minister said no such move has been discussed in the cabinet.
Sheikh Rashid expressed hope that Prime Minister Imran Khan will complete his five-year tenure and the current opposition will not succeed in any undemocratic move.
Sheikh Rashid said that the forces and the nation of Pakistan were way more ‘experience’ now. Imran Khan is fortunate to have such ‘incompetent’ opposition, he said, adding that government would let opposition come to Islamabad and fulfill its desire for a long march, but if the opposition made a mistake that caused a loss to democracy, it will be up to them.