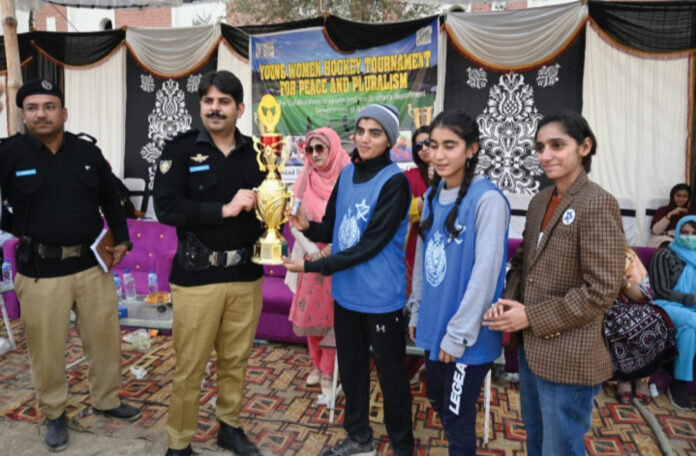 LARKANA
Community Development Foundation Jacobabad along with Department of Sports and Youth Affairs Sindh organized Girls Hockey Competition in Girls Jacobabad. Three hockey teams from Jacobabad participated in the competitions
The final of the hockey competition was between the hockey teams of Maryam Mukhtar and Shaheed Benazir Bhutto at the Hockey Ground of Girls College. The Shaheed BB Hockey Team won by two goals to one, Amna Baloch was awarded Best Player of the Year.
The award ceremony was held at the Hockey Ground of the Girls’ College In which SSP Jacobabad Shamail Riaz was the special guest,
Madam Saeedah Mehr Principal and Hafsa Iqbal Vice Principal Girls College; Madam Nazneen and Ayesha Principal TCF School distributed trophies and cash prizes to the winning teams and medals and cash prizes among the athletes.
Speaking at the closing ceremony, CDF leader John Odhono said that the Department of Sports and Youth Affairs of the Government of Sindh has provided financial assistance for organizing these hockey competitions. The aim is to provide Jacobabad girls with social networking opportunities through sports and to showcase their extracurricular skills.
SSP Jacobabad Shamail Riaz Congratulates CDF On Hockey Tournament And said I salute the parents who helped their children in sports and education in the Jacobabad environment.
He said that there is a dearth of opportunities for women in the affected areas, including Jacobabad, to showcase their potential. Women can use their talents to play a vital role in the development of the country, On the occasion SSP Jacobabad announced to provide four security camera systems to the college for the protection of students and students. He also distributed cash prizes among the participating teams and players.