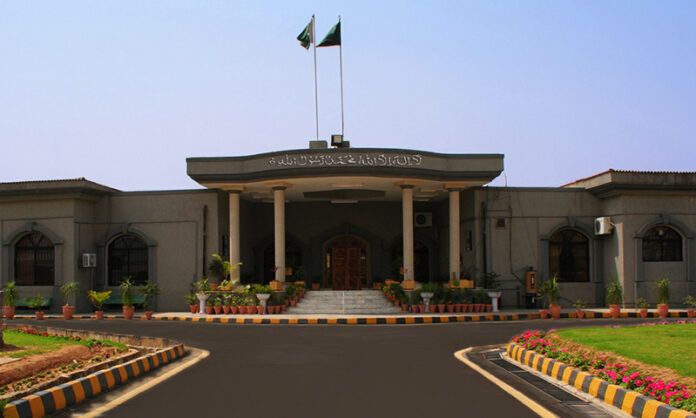 Contempt of court case
ISLAMABAD
Islamabad High Court (IHC)has rejected apology of former chief judge Gilgit-Baltistan Rana Shame in contempt of court case.
The court gave one week time to Rana Shamim for filing another affidavit.
The case came up for hearing Monday before single bench of IHC led by Chief Justice (CJ) Athar Minallah,
The court remarked “ it is my personal opinion if some one tenders genuine apology then there is no ego of our in this matter. You can criticize this court or judges. We have made the law clear.
The court inquired from the counsel of Rana Shamim what you have written in your statement.
The counsel for Rana Shamim said we have filed unconditional apology. Our apology be accepted.
The court directed Rana Shamim to sit on his seat.
The counsel for Rana Shamim told the court “ I read the last paragraph of Rana Shamim statement. Rana Shamim wrote that after chief justice he Heard from Saqib Nisar about the senior most judge.
The court remarked he was at number 4 at that time whose name you mentioned in affidavit. You are further complicating this case. Is Rana Shamim still standing by his affidavit. No one can influence this court no matter he is chief justice. Sticking to affidavit and apology cannot go side by side.
You leveled allegation and a big newspaper published it. You are saying memory was not good. Are you saying it still that you had given that statement wrong.
Counsel for Rana Shamim said “ no, no I did not say so.
The court remarked if it was no so then this court will clear it. Apology is not offered half heartedly. If some one has influenced this court after 2018 then we are accountable. This joke has been made so much. This is IHC.
We have to make the other person realize in contempt of court case what he did. Did he extend unconditional apology. No matter is matter of ego of the court.
See the previous all record of this court what is happening in contempt of court cases. Whosoever were the senior most judges at that time, court cannot ignore them. We can do so that we can give another chance to Rana Shamim. Rana Shamim should give this statement in the form of affidavit. This court does not want to cause any harm to any one. This is not motive of contempt of court law that harm should be caused to any one.
The court directed Rana Shamim to file affidavit. Give affidavit within one week without any pressure. No harm will be caused to you on this statement. If the accused tells every thing in criminal cases in US then it is considered enough.
Rana Shmim told the court I am ready to file another affidavit today.
The court remarked you should file affidavit again with full thought.
The amicus curiae FaIsal Siddiqui told the court whatever a new statement is given by Rana Shamim it should be published in news paper. The way court was made controversial it should be made clear the same way too. We will see this matter.
The hearing of the case was adjourned till September 19.