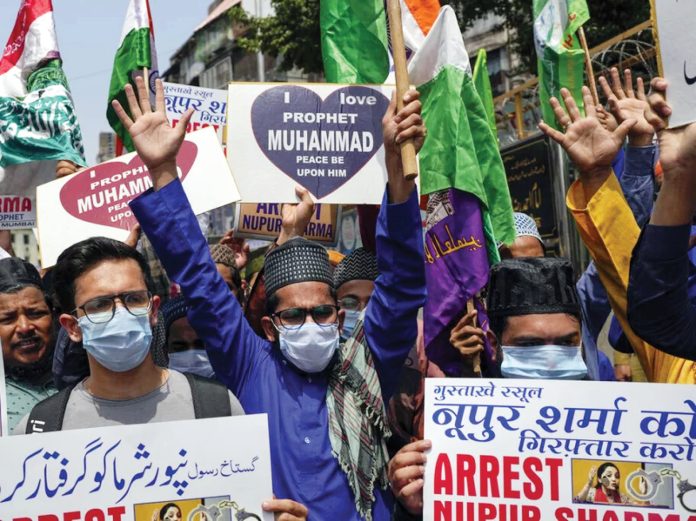 NEW DEHLI
The Indian Supreme Court on Friday berated Nupur Sharma, the ruling Bharatiya Janata Party’s (BJP) suspended official whose derogatory remarks against Prophet Muhammad (PBUH) last month sparked global protests, saying she should “apologise to the whole country”.
“We saw the debate on how she was incited. But the way she said all this and later says she was a lawyer, it is shameful. She should apologise to the whole country,” said Justice Surya Kant.
Sharma, as the BJP’s spokesperson, and another party leader, Naveen Kumar Jindal, had made disrespectful remarks about Holy Prophet (PBUH) last month, drawing criticism and rebuke from across the world, particularly Muslim countries.
For its part, the BJP had suspended Sharma and expelled Jindal after the strong reaction to their comments.
However, an uproar was witnessed over the remarks across the world and within India, as Indian Prime Minister Narendra Modi’s party faced condemnation in Muslim countries and other nations. Muslims took to the streets across Asia, including India, where protesters faced a crackdown by Indian authorities.
Meanwhile, multiple cases were registered against Sharma in different cities, following which she moved the SC to transfer all cases against her to Delhi, citing threats.
As the SC took up her plea today, it blamed Sharma for “igniting tension” by her derogatory comments about Holy Prophet (PBUH). “She is single-handedly responsible for what is happening in the country”, Indian newspaper quoted.
“Her outburst is responsible for the unfortunate incident at Udaipur,” the court added, referring to the grisly beheading of tailor in the Indian city earlier this week.
According to India Today, the court noted that Sharma’s comments were made either for “cheap publicity, a political agenda or for some nefarious activities”. The court also said that she had “threatened the security of the nation”.
“A spokesperson can’t make such statements. Sometimes power goes into the heads of people and they think they are everything. Why didn’t she (Sharma) file a case against the ones who instigated her to make these statements?” the SC bench said.
The Hindustan Times reported that the court dismissed Sharma’s petition, saying: “When you lodge a complaint against someone, that person is arrested but nobody dares to touch you. That shows your clout.”