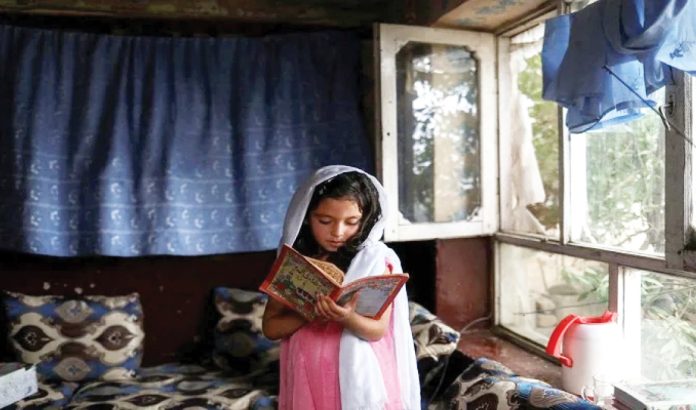 KABUL
Religious and ethnic leaders from across Afghanistan discussed girls’ education at a gathering organised by the country’s Taliban rulers on Thursday — but without any women taking part.
It was the first such meeting since the Taliban took over Afghanistan last August as Western forces withdrew, a change in power that raised international concern about a curtailment of women’s rights.
In March the Taliban backtracked on their announcement that high schools would open for girls, saying they would remain closed until a plan was drawn up in accordance with Islamic law for them to reopen.
One attendee at the gathering in Kabul, Sayed Nassrullah Waizi from central Bamiyan province, said girls should be allowed to attend high school.
“They will learn and will be a good guide for their children in society,” he said.
But it was not clear how much support this sentiment would receive or how a decision on the issue might be reached.
The Taliban’s spokesman said the group would respect whatever those at the gathering decided on girls’ schooling but that the final decision would be made by the Supreme Leader Haibatullah Akhunzada.
It was not yet confirmed if the reclusive leader, who is based in the southern city of Kandahar, would attend, spokesman Zabihullah Mujahid told a news conference.
Civil society groups have criticised the lack of female participation in the gathering.
Taliban acting deputy prime minister said women were involved because their male relatives would attend. Mujahid said women could be included in future similar meetings.
Foreign governments have said the Taliban needs to change its course on women’s rights before economic sanctions imposed after they seized power can be lifted. Afghanistan is in a deep economic crisis as billions in central bank reserves have been frozen.
Acting Prime Minister Mohammad Hasan Akhund said in a speech at the gathering that it was aimed at addressing challenges and solving problems.
“This government has been reached after a lot of sacrifice, we should work together to strengthen it,” he said.
Local media reported sounds of gunfire near the site. The Taliban spokesman said there was no threat and that security guards had fired on a “suspicious location”, without providing details.
The gathering appeared similar to a “loya jirga”, a traditional form of decision-making in Afghanistan.