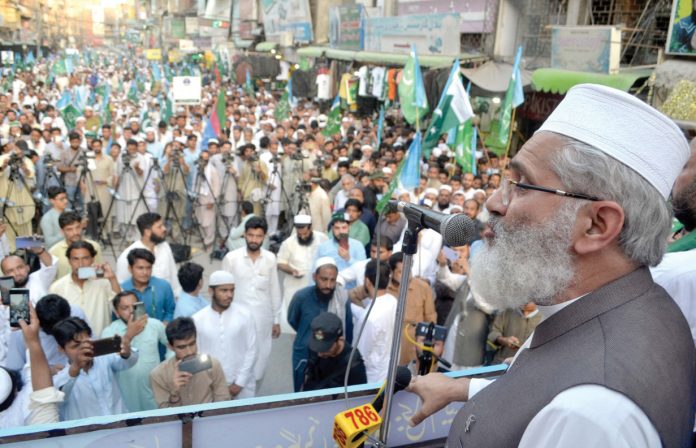 People are unable to afford increase in electricity tariff, food items: Siraj-ul-Haq
PESHAWAR
Jamat-e-Islami (JI) Khyber Pakhtunkhwa chapter on Friday staged a protest against inflation and electricity price hike at Khyber Bazar in Peshawar.
Leaders and workers of the JI chanted slogans against the federal and provincial governments which, they said, have badly failed to give relief to poor people of the province.
Addressing the protest, JI Emir Siraj-ul-Haq said that lower-middle class and poor were unable to afford inflated power bills, wheat, sugar, and other necessities because of low purchasing power.
He said, “People were already facing backbreaking inflation and the recent increase in electricity tariffs would cripple them economically.”
Siraj said the JI had started protests across country against the incumbent government anti-poor policies, adding that it had been proved that Pakistan Tehreek-e-Insaf (PTI), Pakistan Muslim League Nawaz (PMML-N) and Pakistan People Party (PPP) were sides of the same coin and they had no relief plan to implement for the inflation-hit people.
Siraj-ul-Haq announced that in the next phase of the protest movement, Jamaat-e-Islami will demonstrate in Islamabad on August 15 and surround the LESCO headquarters in Lahore on August 17.
Addressing the protestors, Sirajul Haq clarified that if the government says that electricity was expensive due to expensive contracts with IPPs, then those people who made expensive contracts should be arrested, the poor people should suffer the punishment of the rulers’ cruelty.
PTI has been in power in Khyber Pakhtunkhwa for the last nine years but all this time the incompetent and incompetent rulers have not taken a single step for the betterment of the people, he added.
The PDM government made lofty claims to alleviate the economic woes, but its measures have made it impossible for the people to live. Siraj-ul-Haq said that at present there was great fear in Malakand division and target killing incidents have increased across the province.
The people of Malakand and tribal areas are no longer ready to become IDPs, earlier they were kicked out of their homes but this time no one is ready to accept the extremist elements.
A large number of people from different walks of life participated in the protests. A large number of people including traders, shopkeepers, laborers participated in the demonstration.
They chanted slogans and carried banners inscribed with “electricity bill unapproved, IMF government unapproved government”.
Member National Assembly (MNA) Abdul Akbar Chatrali, Emir JI district Peshawar Atiqur Rahman and other leaders also spoke on the occasion.

Intermediate part 2 result to out on 20 October

October 2, 2022
© All rights reserved by LeadPakistan