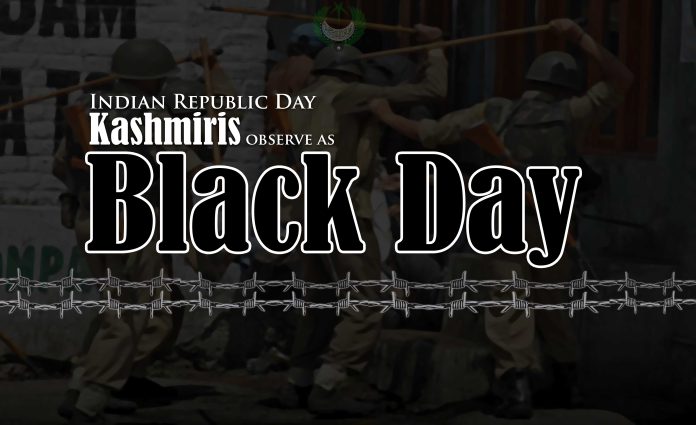 ISLAMABAD
Kashmiris all across the globe would observe India’s Republic Day on January 26 as Black Day with the objective to give a clear message to the world community that they reject the occupation of their motherland by India. The call for observing Black Day was given by the All Parties Hurriyat Conference (APHC) and has been supported by many pro-freedom parties in Indian Illegally Occupied Jammu and Kashmir (IIOJK).
Chairman APHC, Masarrat Aalam Butt in his message from the infamous Tihar jail has appealed to Kashmiris living in IIOJK and the world over to mark this day as Black Day. He said since India was involved in war crimes against humanity in the occupied territory so it has no right to claim itself to be a democracy.
Meanwhile, urging Kashmiri masses to observe India’s Republic Day as Black Day, senior APHC leader Nayeem Ahmed Khan said that the fascist country that had usurped the fundamental rights of Kashmiris has no justification whatsoever to celebrate republic day.
In his message from Tihar jail, the incarcerated leader denounced India’s illegal and forcible occupation of Jammu and Kashmir and said, “notwithstanding their commitments of holding a free, fair and impartial plebiscite to let the people of Jammu and Kashmir decide their political fate, the Indian rulers have chosen a violent path to suppress by dint of force the aspirations of Kashmiri people”, Khan said.
He said, it was incumbent upon the international community to take serious notice of the illegal occupation of Kashmir by India and its belligerent occupation of Kashmir, which he said has been a major cause and consequence of unrest in the region.
Meanwhile, the Democratic Freedom Party (DFP) also reiterated full support for APHC’s call for a strike to convey a message to the world that India’s unlawful and forcible occupation of their motherland was not acceptable to them. “The country that is grossly involved in death and destruction in Kashmir and holding millions of Kashmiris hostage at the gunpoint has no right whatsoever to observe Republic Day”, the DFP spokesman said in a statement received here.
He said the whole world knows that India was a usurper that has always trampled Kashmiris’ aspirations and their democratic rights besides keeping them under illegal military occupation for the last over 75 years. While condemning the duality of the Indian rulers, he said that on the one hand, Indian leadership makes lofty claims of being the largest democracy while on the other hand, they have deprived Kashmiris of their basic rights.
It is pertinent to mention here that posters were displayed in IIOJK with slogans like ‘Kashmiris observe Indian Republic Day as Black Day’ and ‘Indian Republic Day is Black Day for Kashmiris’.