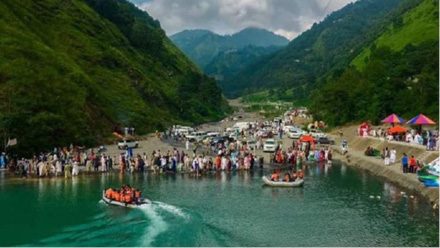 ISLAMABAD
Khyber Pakhtunkhwa tourism department was taking all necessary steps towards ‘safe tourism’ for upcoming season of winter and established an ‘information center’ for guidance related to tourist destinations in the region, Director Tourism Authority Khursheed Alam said on Saturday.
Talking to a private news channel, Director said that winter bells are ringing in northern parts of the country including Babusir top where first winter snowfall was received, adding, KPK tourism department is all set to welcome its winter tourists.
He said that all tourist destinations in Khyber Pakhtunkhwa will be opened in winters, for which all arrangements have been completed.
Tourist destinations are being opened with strict winter related SOPs while implementation of SOPs in hotels and tourist spots will also be ensured, he added.
Hospitality training of locals and KPK tourism police was also conducted, adding, more trainings would be imparted to the tourism police after tourism season to enhance their capacity and for better service to the tourists and visitors at the scenic attractions of the province.
Every year thousands of families from across Pakistan as well international tourists are visiting various destinations in the region in winter to enjoy winter snowfall, he said, adding, this year too KPK tourism department would facilitate its tourists.
He also lauded the enthusiasm of new recruits and rescue teams of KPK who rescued the tourists during the time of flood.
Replying to a query, he also advises winter tourists to come fully equipped, with proper shoes and jackets, if they plan on visiting the valley during winter.
With the coordination of district administration rehabilitation and construction of roads were also underway after flood while at different tourist spots camping pods were installed for the facilitation of tourists.