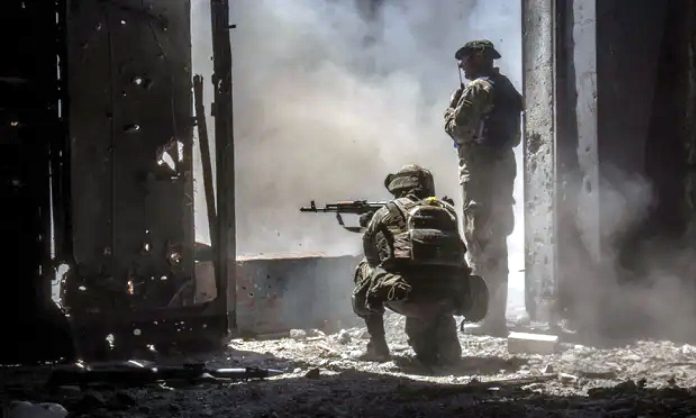 Neighbouring city of Lysychansk could fall within days as Russia continues slow advance in Donbas
Sievierodonetsk
The last Ukrainian forces fighting in the heavily contested eastern city of Sievierodonetsk have been ordered to withdraw in order to avoid being encircled, as fears grow that the neighbouring city of Lysychansk could also fall to Russia within days.
The anticipated loss of Sievierodonetsk is the latest battlefield reverse for Kyiv after its defeat in the port city of Mariupol. According to some estimates about 12,000 civilians remain in Sievierodonetsk, out of a prewar population of 160,000.
All three bridges offering escape routes west over the Siverskyi Donets River to the twin city of Lysychansk have been destroyed in fighting, and the mayor, Oleksandr Striuk, says the humanitarian situation is critical.
The Luhansk governor, Serhiy Haidai, said on Friday: “The situation right now is as such that staying at these destroyed positions just for the sake of being there doesn’t make sense.” He said Ukrainian forces had “received the order to retreat to new positions and continue fighting there”, but did not give further details.
Russians were also advancing toward Lysychansk from Zolote and Toshkivka, and Russian reconnaissance units had been conducting forays on the city edges but were driven out by its defenders, he added.
Haidai said Sievierodonetsk had been “nearly turned to rubble” by continual bombardment. “All critical infrastructure has been destroyed. Ninety per cent of the city is damaged, 80% [of] houses will have to be demolished.”
In recent weeks fierce street fighting pushed the Ukrainians back from much of the city, leaving them in control only of industrial areas.
“Our forces had to withdraw and conduct a tactical retreat because there was essentially nothing left there to defend. There was no city left there and, secondly, we could not allow them to be encircled,” said Oleksander Musiyenko, a Kyiv-based military analyst.
Some analysts have questioned the wisdom of Ukraine’s efforts to hang on to a foothold in Sievierodonetsk despite the heavy casualties. The fall of the city will allow the Kremlin to claim it has captured almost all of Luhansk province, which together with Donetsk makes up the eastern Donbas region.
Russia now appears to be concentrating its forces on Lysychansk, the last city held by Ukraine in Luhansk province. About 6 miles south of Lysychansk, Russian troops had entered the town of Hirske and fully occupied the district on Friday, local officials said.
Maria Zolkina, a political analyst at the Ilko Kucheriv Democratic Initiatives Foundation in Kyiv, tweeted that the defence of Sievierodonetsk has served Ukraine’s objectives, but now was the right time to pull back.
“Ukraine has three main goals: keep the land, keep the army and exhaust Russia’s army up to maximum,” she wrote. “[The] battle for Sievierodonetsk was more and more about exhausting [Russia’s] skilled human resources … And now it is about saving army units, who are our main resource.”
Moscow is pursuing a relentless, scorched-earth policy in its slow, grinding advance in the Donbas. The latest reverse for Kyiv comes despite an increased flow of long-range and sophisticated weapons systems from western allies to heavily outgunned Ukrainian defenders.
Sign up to First Edition, our free daily newsletter – every weekday morning at 7am BST
The order to retreat followed grim assessments from outside observers over the trajectory of the battles in Ukraine’s east in recent days.
The Institute for the Study of War (ISW), a US thinktank, said in its latest assessment on Thursday that Russian forces had been making substantial gains in the Sievierodonetsk-Lysychansk area over the last few days. It said Ukrainian and Russian troops had sustained high casualties in a battle it described as a “fixation” for Moscow.
“Russian offensive operations will likely stall in the coming weeks, whether or not Russian forces capture the Sievierodonetsk-Lysychansk area, likely granting Ukrainian forces the opportunity to launch prudent counteroffensives,” the ISW predicted.
“The loss of Sievierodonetsk is a loss for Ukraine in the sense that any terrain captured by Russian forces is a loss, but the battle of Sievierodonetsk will not be a decisive Russian victory.”
Lysychansk and the main road to the city from the west came under heavy shelling on Friday after reports that Russian forces had reached outlying areas on Thursday.
Liliya Nesterenko, interviewed by AFP, said her house had no gas, water or electricity and she and her mother had been cooking on a campfire. But the 39-year-old was upbeat about the city’s defences. “I believe in our Ukrainian army, they should [be able to] cope. They’ve prepared already,” she said.
A representative of pro-Russia separatists in Ukraine earlier told AFP that the resistance of Ukrainian forces trying to defend Lysychansk and Sievierodonetsk was “pointless and futile”.
“At the rate our soldiers are going, very soon the whole territory of the Luhansk People’s Republic will be liberated,” said Andrei Marochko, a spokesperson for the Moscow-backed army in Luhansk.
After a botched attempt to capture Kyiv, Ukraine’s capital, in the early stage of the invasion that started on 24 February, Russian forces have shifted focus to the Donbas region, where Ukrainian forces have been fighting Moscow-backed separatists since 2014. The Russian military controls about 95% of Luhansk province and about half of neighbouring Donetsk province.
After repeated requests to its western allies for heavier weaponry to counter Russia’s edge in firepower, Ukraine’s defence minister, Oleksii Reznikov, said a response had arrived in the form of American medium-range rocket launchers.