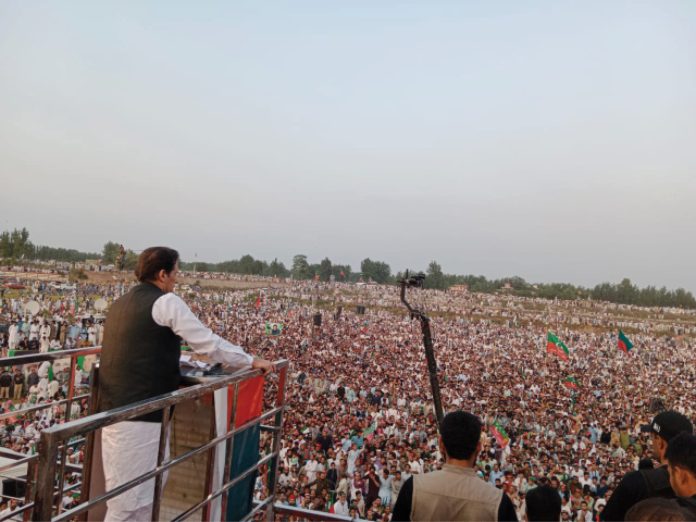 Charsadaa rally is part of PTI’s efforts to force coalition govt to call early polls
islamabad
Former prime minister and PTI Chairman Imran Khan has warned the ‘imported government and its backers’ to hold the early and transparent elections to let the change come through the power of vote, warning that the situation would get out of control if polls were delayed any further.
“If you stop this ‘peaceful revolution’ then as World Bank has predicted the game [situation] would get out of everyone’s hand. Let the change come through vote,” he said while addressing his party’s power show in Khyber-Pakhtunkhwa’s Charsadda district on Saturday.
Imran while addressing the coalition government and its ‘backers’ said, “No matter what you do you cannot win this match you have already lost this match… economy is sinking fast and the world is not willing to give them [government] financial aid for flood victims.”
The PTI chairman said there is still time to steer the country out of quagmire by holding free and fair elections, adding that “the time is not far when he gives call to the nation to achieve real freedom”.
Quoting IMF and World Bank reports, Imran claimed that the country was going down under the incumbent rulers. “Pakistan is going to become Sri Lanka. Those responsible for toppling my government will not be forgiven,” he added.
“Sindh is worst-hit from floods but because of Zardari, the international community is not ready to help,” said the former premier.
While comparing his tenure with the incumbent government, Imran said prices of everything including fuel and electricity have gone through the roof.
“During our time, petrol was Rs150 a litre at that time crude prices were between $95 to 110 per barrel but today despite drop in global prices petrol is expensive in the country,” he added.
Speaking about the rise in terrorist attacks, Imran urged the federal government to fulfil its duty and restore law and order in Malakand district of the province.