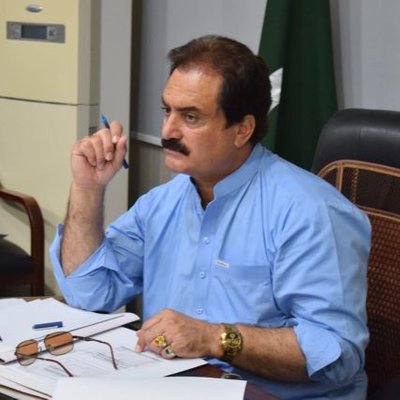 DLP Report
PESHAWAR
The Provincial Minister for Agriculture, Livestock and Fisheries Mohibullah Khan has said that being agriculture the country imports a number of food items, adding that Khyber Pakhtunkhwa (KP) was the first province who approved food security policy.
Mohibullah Khan said successive governments of the country did not pay heed towards the agriculture sector and as a result our population faced food security issues.
He expressed these views while addressing a farmers’ convention in Peshawar here on Friday.
Welcoming the participants of the Farmers’ Convention, the Secretary Agriculture Dr Muhammad Israr Khan said that the purpose of the convention was to inform the farmers about the new programs and to get their suggestions. Due to population growth and lack of agricultural land, food items have to be purchased from other countries, he added.
The Minister for Agriculture said that Pakistan Tehreek-e-Insaf (PTI) in its government at the centre had launched mega budget projects for making the sector par with developed countries.
“PTI government for the first time increased the allocation of funds in annual budgets for the promotion of agriculture from Rs 2 billion to several billion.
Eleven projects worth Rs 45 billion have been approved by the then federal government of PTI,” he shared.
Muhibullah claimed that in 70 years, 25000 water courses have been constructed in KP, while in the last five years, the target has been set to increase this number to 50,000.
He said KP was the only province which has introduced food security policy which has resulted in an increase in meat and milk production from projects for protection of farmers and livestock production capacity.
The Minister for Agriculture claimed that several projects have been launched under the Agriculture Emergency Program, adding that 1200 farmers benefited from Katta Bachao, Katta Farba and Faru and hundreds of buffalo and cow breeds were saved.
A number of schemes have been devised by the department concerned to protect animals from diseases, to establish veterinary dispensaries and to provide free vaccines across the province, he added.
He said that for the first time in history, a census and farm census program and a veterinary university were established.
Seventy percent of the country’s population is dependent on agriculture and livestock. This sector was not given any importance before. Record reforms in agriculture have been introduced in recent times. In which there are valuable agricultural policies.
Asif Awan, President of Livestock Farmers Welfare Association KP, Sardar Fahad Qayyum, Ms Ruqia, Ms Shama, Fazal Rabi, Mohammad Khan from Sindh appreciated the convention.
Former Federal Minister for Communications Murad Saeed also spoke on the occasion and shared PTI vision for the agriculture sector.