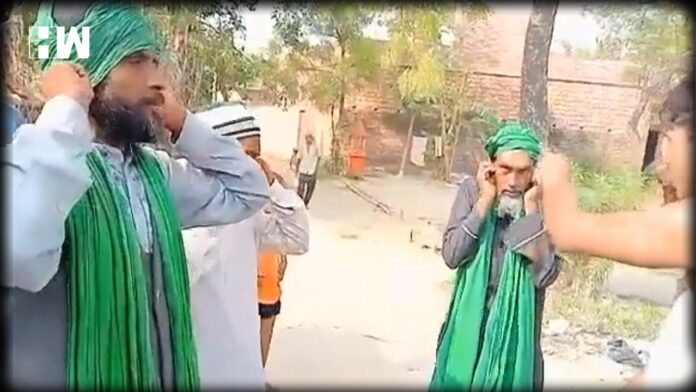 NEW DELHI
Videos from a village in Indian state of Uttar Pradesh show locals slapping and harassing three Muslim fakirs (ascetics) who were begging for alms. Videos shared on social media show the men being forced to do sit ups and chant ‘Jai Shri Ram’.
According to Indian media, the incident occurred in Degur village in Gonda area. “They wear the clothes of sadhus but they will eat biriyani with this money,” another is heard saying. Videos show one man, armed with a large stick, demand identification from the fakirs.
When they say they do not have any, he calls them “jihadis” and “terrorists”. “Just show us your Aadhaar, or we will thrash the stuffing out of you… All of you are ‘terrorists’… Carry your Aadhaar at all times,” he says, according to media. One of the perpetrators has been arrested by the police, the news channel’s website reported.
In a separate incident, a man identified as Tushar Shukla was seen harassing a Muslim shopkeeper in Kanpur. Shukla, who is apparently the Yuva Morcha president of the ‘Hindu Coordination Committee’, tries to force the shopkeeper to stop selling clothes on the road. The man has been arrested.
India has been at the centre of a diplomatic backlash after two BJP leaders made blasphemous comments against Prophet Mohammad (peace be upon him). Condemnations issued by several West Asian and Islamic countries heaped pressure on the BJP, which suspended Nupur Sharma and expelled Naveen Kumar Jindal.