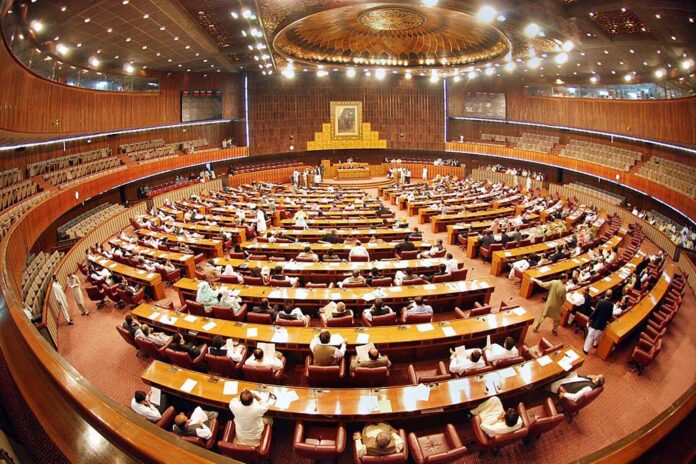 ISLAMABAD
The National Assembly will elect the new leader of the House on Monday (April 11) after passage of no-confidence motion against Imran Khan.
President PML-N, Mian Muhammad Shehbaz Sharif and PTI Vice-President Shah Mehmood Qureshi are in the run for slot as both submitted their nomination papers for new leader of the House in National Assembly. Their papers were scrutinized and accepted by the National Assembly Secretariat. Earlier, Dr. Babar Awan raised objections on nomination papers of PML-N President Shehbaz Sharif but these were rejected by the NA Secretariat.
The sitting would be held on Monday (April 11) at 2:00 pm to elect new leader of the House (Prime Minister). Before commencement of the poll, the Chair will read out to the Assembly the names of the validly nominated candidates, hereinafter referred to as the contesting candidates, in the order in which their nomination papers were received and proceed to hold the poll in accordance with the procedure set out in the Second Schedule.
According to the second schedule, the Speaker of Chair shall direct that the bells be rung for five minutes before commencement of voting to enable members not present in the Chamber to be present. Immediately after the bells stop ringing, all the entrances to the Lobby shall be locked and the Assembly staff posted at each entrance shall not allow any entry or exit through those entrances until the voting has concluded.
The Speaker or Chair shall then read out the resolution before the Assembly and ask the members who wish to vote in favour of the resolution to pass in single file through the entrance where tellers shall be posted to record the votes. On reaching the desk of the tellers, each member shall, in turn, call out the division number allotted to him under the rules.
The tellers shall then mark off his number on the division list simultaneously calling out the name of the member. In order to ensure that his vote has been properly recorded, the member shall not move off until he has clearly heard the teller call out his name.
After a member has recorded his vote, he shall not return to the Chamber until bells are rung after conclusion of voting process.
When the Speaker finds that all the members who wished to vote have recorded their votes, he shall announce that the voting has concluded.
Thereupon the Secretary shall cause the division list to be collected, count the recorded votes and present the result of the count to the Speaker.
The Speaker shall then direct that the bells be rung for two minutes to enable the members to return to the Chamber. After the bells stop ringing, the Speaker shall announce the result to the Assembly.