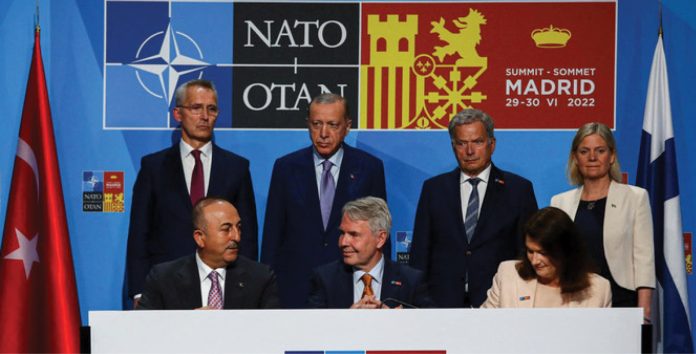 The alliance also agreed on a new strategic concept
MADRID
NATO has invited Sweden and Finland to become members of the military alliance, a commununique published by the NATO summit in Madrid on Wednesday said.
“The accession of Finland and Sweden will make them (the allies) safer, NATO stronger and the Euro-Atlantic area more secure,” the communique said, adding that the alliance also agreed a new strategic concept.
The communique described Russia as the “most significant and direct threat to the allies’ security,” a reaction to the massively deteriorated relationship to Russia since its invasion of Ukraine.
The alliance pledged further help to Kyiv and agreed a package of support aimed at modernizing the country’s defense sector. At the same time, NATO decided to significantly strengthen its own deterrence and defense.
“Allies have committed to deploy additional robust in-place combat-ready forces on our eastern flank, to be scaled up from the existing battlegroups to brigade-size units, where and when required underpinned by credible available reinforcements, prepositioned equipment, and enhanced command and control,” the communique said.
In the communique, the alliance described China as a challenge to NATO’s interests, security and values, and as a country that is seeking to undermine the rules-based international order.
Japan’s Kishida backs Sweden’s NATO bid
Japanese Prime Minister KISHIDA Fumio on Wednesday expressed support for Sweden’s bid to join NATO in a meeting with his Swedish counterpart, Magdalena Andersson, on Wednesday.
“We support (Sweden’s) historic decision. We also express our respect for its efforts,” Kishida told Andersson.
NATO, which opened a two-day summit in Madrid on Wednesday, is expected to grant membership to Sweden and Finland after Turkey switched to support their participation.
Kishida said that Japan and Sweden will hold the presidency of the Group of Seven major powers and the European Union, respectively, next year.
Japan hopes to strengthen its relations with Sweden further as partners sharing basic values, Kishida added.
Andersson expressed gratitude for Japan’s strong action against Russia in response to its invasion of Ukraine.