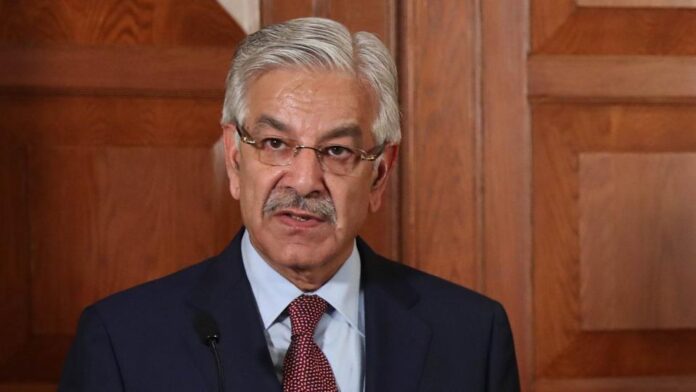 ISLAMABAD
Federal Defence Minister Khawaja Asif said Wednesday that the process of appointing the new army chief would start by month-end.
Addressing a press conference in Islamabad, he said that five senior officers were shortlisted for the appointment of the new army chief, adding that the new army chief could be chosen from any of those officers.
“All names are sent by the General Headquarters (GHQ), and all these names are thoroughly reviewed,” he added. “A cipher is a state secret. Such confidential matters should not be made public. Imran Khan has also violated the Official Secrets Act,” he stated.
“This person will surely be held accountable. He dares government to arrest him. He will come to his senses the day he goes to jail,” he added. He also said that lust for power had turned Imran Khan mad, adding that Imran Khan’s mental state was not stable.
“Imran Khan should be ashamed of himself after audio leaks that have exposed his narrative of foreign conspiracy,” he stated. Khawaja Asif vowed to fight against anti-army campaign as defence minister. “We do not want any relief to Imran Khan. We will not seek political revenge, but this person is not a politician from any side. We are aware of the traditions of political workers,” he pointed out.
“We will fight Imran Khan on social media, and we will take him to the courts too. I have not heard the audio leaks of Prime Minister Shehbaz Sharif myself. But there is no anti-state element in his talk. In the audio leaks of Imran Khan, there is a conspiracy against Pakistan,” he stated.
“It can be inferred from Imran Khan’s talk that the institutions have become neutral. Our institutions, army, judiciary, parliament and media are working according to the Constitution,” he added.
“Such people had been imposed in the country in the past as well. Imran Khan constantly criticises the army chief. Pakistan Army has made countless sacrifices for the country. No other force has given as many sacrifices as the Pakistan Army. The army is still fighting against terrorism,” he emphasised.
“Imran Khan is constantly trying to portray lies as truth. Imran Khan hurls abuses at his friends. Imran Khan himself scrapped the copy of the cipher,” he deplored. “Power comes and goes. Imran Khan tells lies in public meetings,” he castigated and asked Imran Khan to tell one case of the leaders of the coalition government that had been forgiven.
“Institutions are working in the light of the Constitution which is not acceptable to Imran Khan. He is turning mad for November. The month of November will also pass peacefully,” he pointed out.