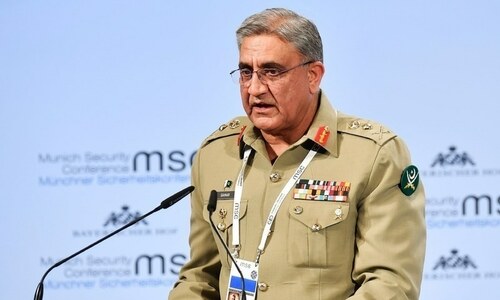 Says Effective diplomacy only possible through strong economy; will retire on completing my term
WASHINGTON
Chief of the Army Staff Gen Qamar Javed Bajwa says effective diplomacy is only possible through strong economy. He said this during an informal talk at the luncheon arranged by Pakistan Embassy in Washington.
The Army Chief said reviving the country’s ailing economy should be the first priority of all segments of society as without a strong economy it’s hard to achieve set targets. Settling the dust for once and all, General Qamar Javed Bajwa has made it crystal clear that he will retire after completing his term in office.
The Army Chief said the Armed Forces had distanced themselves from politics and they wanted to remain so. General Bajwa also reminded the nation that it should be the priority of all segments of the society to lay their focus on reviving the ailing economy.
Reiterating his promise to leave his post after completing his second three-year term in two months, the Army Chief said he will fulfil his promise made earlier. Talking informally to the guests at the luncheon gathering, General Bajwa said: “Rehabilitating the sick economy of the country should be the first priority of all sections of the society.
Without a strong economy, the nation will not be able to achieve its goals. Diplomacy is also not possible without strong economy.” A large number of diplomats also attended the ceremony addressed by the Army Chief.
Meanwhile, according to ISPR, Chief of Army Staff (COAS) General Qamar Javed Bajwa called on US Secretary of Defence Lloyd James Austin III, National Security Advisor Jacob Jeremiah Sullivan and Deputy Secretary of State Wendy Ruth Sherman during his visit to the United States.
The military’s media wing says matters of mutual of interest, regional security situation and bilateral cooperation in various fields were discussed during the meetings. COAS Bajwa thanked US officials for their support to the flood victims.
Army Chief reiterated that assistance from our global partners shall be vital for rescue and rehabilitation of the flood victims in Pakistan. “Both sides agreed that Pakistan and US have long history of bilateral cooperation and shall continue improving through economic ties, trade and investment,” ISPR said.
COAS Bajwa also offered heartfelt condolence on the deaths and devastation caused by hurricane in Florida. Both sides also agreed to continue to cooperate through trade and investment. It is to be noted here that Army Chief General Qamar Javed Bajwa is in the United States on an official visit. His second three-year term is going to complete in two months.