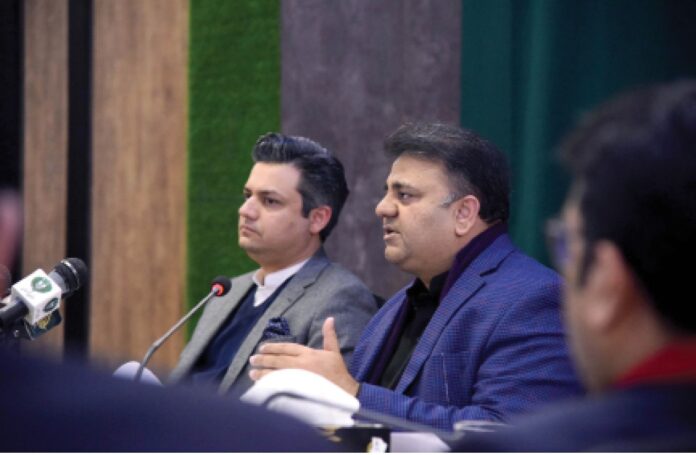 Says circular debt to witness decline from this year | Fawad says PM seeks finalisation of master plans of big cities on priority
ISLAMABAD
The State Bank of Pakistan (Amendment) Bill is not without checks and balances which have been incorporated after hard negotiations with the International Monetary Fund (IMF).
Energy Minister Hammad Azhar made the remarks while addressing a press conference along with Information Minister Fawad Chaudhry after the federal cabinet meeting on Tuesday.
Hammad said that central banks are always kept autonomous in the world since there is enough evidence that it allows developed nations to bring down inflation and ensure economic growth. “The federal government will appoint the central bank’s board of directors whose members can even remove the state bank governor,” he said, adding: “We managed to secure this concession of appointing the state bank board along with its governor and deputy governor from the IMF after hard negotiations.”
He maintained previous administrations tried to influence central bank officials while dictating to them how to manage the county’s monetary policy. He added a similar bill was also suggested in 2015 by the opposition Pakistan Muslim League-Nawaz party wherein it was willing to surrender all its powers to the central bank board.
The minister noted the government has brought about a comprehensive reform in the area which has also been “demanded by serious Pakistani economists for a substantially long period.”
Refuting the opposition’s criticism over the law, he said it is only going to strengthen the country’s economy and ensure sustained growth momentum.
Speaking about other matters, Hammad said the major reason for the gas shortage in Sindh is the stay order taken by local industrialists from the Sindh High Court (SHC). He expressed the hope that soon the stay will be vacated and around 100mm (standard cubic foot) will be added to the system for household consumers.
Speaking on the occasion, Fawad Chaudhry said the cabinet was briefed on the production and availability of urea in the country. He said the cabinet was told that the demand for urea has increased due to an increase in the cultivation of wheat and an overall increase in prices of urea around the globe.
He said the cabinet was apprised that global urea prices are six times higher than Pakistan. The meeting was also briefed on the electricity transmission system. It was informed that for the first time in the history circular debt will witness a decline from this year.
He said that Prime Minister Imran Khan has directed to finalise the master plans of all big cities on priority basis to ensure restoration of green areas in the cities and discourage land encroachments.
The minister said the federal cabinet also recommended that the Senate and National Assembly should constitute standing committees while keeping in view the element of conflict of interest.
About the Omicron situation, the minister said that daily cases of the virus have reached 5,000 per day while a 30 percent increase of patients in ICU was recorded. Till date vaccination worth $2 billion has been imported.