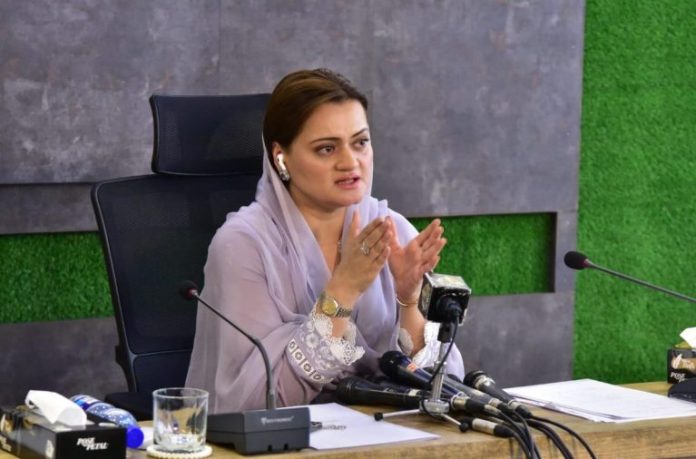 ISLAMABAD
Minister for Information and Broadcasting Marriyum Aurangzeb on Sunday said that no one would be allowed to criticize and violate the Constitution and the law as well.
In a reaction to Fawad Chaudhry’s statement, she said that a person who abused and threatened national institutions should not worry about it. “Imran Khan will not be allowed to play the game of ‘establishment and anti-establishment’ just for a return to power”, she said.
The minister said Imran Khan had admitted that he took the help of institutions and agencies to run the government for four years. She said that no body would be allowed to pressurise justice system through bullying, threats and abuse.
The minister remarked that narrative of Nawaz Sharif and Muslim League (N) remained as the narrative of the Constitution. She advised Imran Khan to stop dragging the army and judiciary into politics as she opined Imran’s target was institutions and he wanted that their leadership should be removed.
She maintained that Imran Khan’s narrative of ‘conspiracy abroad’ was now buried and the new narrative of establishment and anti-establishment has started.
The minister demanded that Election Commission of Pakistan should announce the verdict of foreign funding immediately. “Imran wants NRO in foreign funding case through bullying, intimidation, anarchy, rioting and hooliganism”, she maintained. The full court should hear the case related to the election of the Chief Minister of Punjab, she said.
The Full Court should simultaneously hear the review petition of Supreme Court Bar Association, present petition and other related petitions. Justice on important national, political and constitutional matters should not only be done, but it should also be seen to be done, she remarked.
“With the instability created by Imran Khan, the national economy is again at risk of bankruptcy.
People are paying the price of Imran Khan’s economic disaster in the form of inflation, unemployment and poverty”. She said that Imran wanted to avoid accountability, conceal his corruption and gain power through the back door.
Now this war was against the fascism of the “arrogant anti-constitutional person named Imran”, she said. The people and institutions of Pakistan would not be allowed to become subservient to Imran Khan’s wishes and “We will not let the democratic and constitutional system go bankrupt”, Marriyum Aurangzeb said.
She said that Imran’s thinking and attitude had become a termite for the state system of Pakistan. The minister said that her party would not make any compromise on the Constitution, democracy and people’s rights.