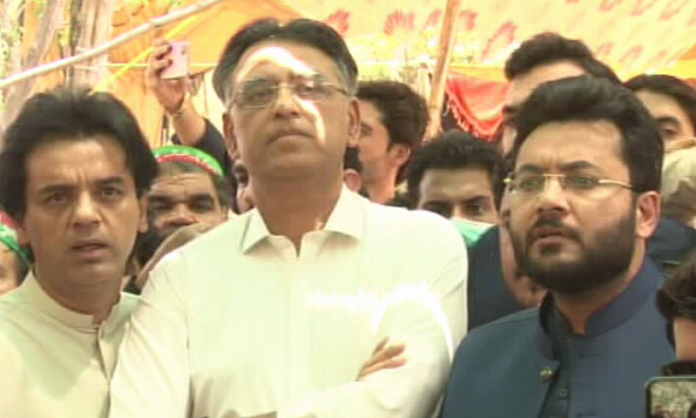 Former federal minister and PTI secretary general Asad Umar on Saturday warned that if an attempt was made to arrest former prime minister Imran Khan or threaten his life, then neither the party leadership, nor Imran himself would be able to stop party workers from reacting.

Talking to the media in Islamabad, he shared that he received a call from a “very senior administration officer” around 5pm yesterday, hours before the PTI chairman was scheduled to address a rally in Multan, in which the officer cautioned Umar that there was a “very serious threat”.

Umar said he spoke to Imran and recommended that bulletproof arrangements be made.

“The very next morning at 3am, in the darkness of the night, a police team arrived [at Imran’s Banigala residence] for a survey. They found time at 3am in the morning after issuing a threat letter 10 days ago. Who are they trying to fool? They already knew Imran was not there.

“If they came to give a message that they could do even this and Imran would be frightened … Imran is a remote possibility, you cannot even frighten the youth standing with me.”

The PTI secretary general said that the more the new government showed their intent to use force, the greater the party’s reaction would be.

Imran Khan and PTI believe in peaceful politics and the rule of law, he said. “PTI never attacked the Supreme Court, never created a bench at the Quetta registry and then orchestrated a decision against a sitting chief justice of Pakistan, never attempted to [hijack] the plane of a serving army chief.”

Instead, the party and Imran Khan’s strength lay in the country’s people and the PTI chairman had “no intention of using violence”, he added. “But I want to tell you. God forbid, even if an attempt is made to arrest Imran or threaten his life, then you will be responsible for what happens in Pakistan. Forget us, even Imran Khan will not be able to hold them (party workers) back.”

Umar said the protection of the head of Pakistan’s “largest political party and future PM” was the responsibility of the government.

Referring to PML-N Vice President Maryam Nawaz, he said that if steps could be taken for the protection of a “person who has not held public office and is not the head of a political party, has been convicted and is out on bail”, then the primary responsibility for Imran’s safety also fell on the government.

“All institutions that can provide protection … it is everyone’s responsibility to protect Imran’s life and take whatever steps that are needed.”

He asked the incumbent government to not “test” the country, saying that there was only one simple, democratic and constitutional way out, which was to announce the date for the general elections.

Umar also criticised incumbent Prime Minister Shehbaz Sharif, saying he pitied him because the premier did not know who had “brought” him into power or what to do.

“He (Shehbaz) has no authority. Yesterday, he asked businessmen what he should do. If you do not know what to do, why are you sitting [as PM]?”

He then repeated his warning saying that if any attempts were made to arrest or harm Imran, the government should not ask the PTI for help because “we will not be able to control Pakistan”.

Earlier in the day, party leader Usman Dar claimed Islamabad Police reached Imran’s Banigala residence with a prison van but went back after seeing a “huge number of Imran’s tigers”.

“Listen carefully! We’re not afraid of the prison van. We ran a trailer in Sialkot, the film is still left,” he tweeted.

Dawn.com has reached out to Islamabad Police for a statement about Umar and Dar’s claims and is awaiting a response.

He was referring to the events preceding the PTI’s May 14 rally in Sialkot when police had prevented party workers from erecting structures in preparation for the rally at the city’s CTI ground after the local Christian community, who owned it, refused to allow its use.

DawnNewsTV had reported at the time that police fired tear gas and baton-charged party activists who were resisting the move.

No fatality, 694 tested positive due to coronavirus in last 24 hours