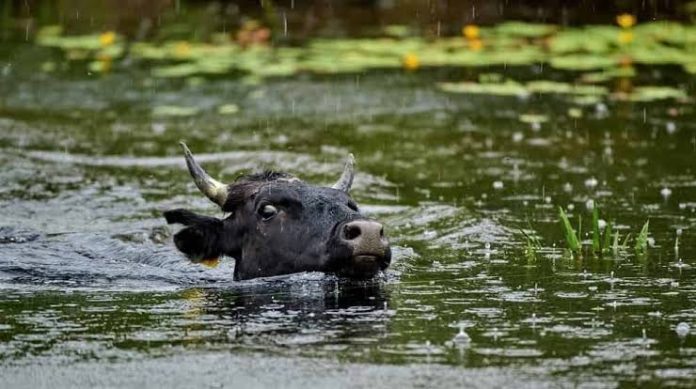 Flood devastations
PESHAWAR
Director General, Livestock and Poultry Department, Dr Alamzeib Khan here Wednesday said that recent floods have made havoc to the livestock and poultry sectors in Khyber Pakthunkhwa where over Rs two billion losses were estimated so far to these sectors.
“The damages to livestock and poultry sectors caused by the recent floods and torrential rains were beyond our imagination. We have started a comprehensive survey to assess financial losses caused by floods to this sector and as per initial reports losses of over Rs2 billion were so far incurred to it,” Dr Alamzaib Khan told APP.
He said the scale of losses to these sectors would be higher than estimations as many valleys in Kalam, Bahrain, Madyan, Kohistan, Kumrat, Dir Upper, and Dir Lower were still out of reach of officials of his department due to destruction of roads and bridges by the devastating floods.
Dr Alamzaib said floods in River Sindh and Koh-e-Suleman starting from South and North Waziristan tribal districts and adjoining valleys have brought havoc to livestock and poultry sectors and time would be required for compilation of flood losses.
He said both the commercial and domestic poultry in Khyber Pakhtunkhwa were badly affected by the torrential rains and floods and many poultry farms in flood hit districts were washed by the natural calamity.
“The pastoral and nomads have bore the brunt of livestock and poultry in upper areas of Dasu, Kolas Palai, Dubair and others valleys in Kohistan districts and compilation of damages was a big challenge due to destruction of roads networks by the floods.”
He said data of livestock damages was being shared with the Secretary Agriculture and Livestock as well as Provincial Disasters Management (PDMA) on a regular basis and onward to National Disasters Management Authority (NDMA).
The Director General said the department would promptly act on the government’s compensation policy regarding flood damages to livestock and poultry farmers and would provide compensation to all affected farmers subject to approval of the government.
Dr Alamzeb said prices of meat and milk were being closely monitored in the open market in the wake of devastative floods and strict action would be taken against shopkeepers involved in artificial price hikes and hoarding.