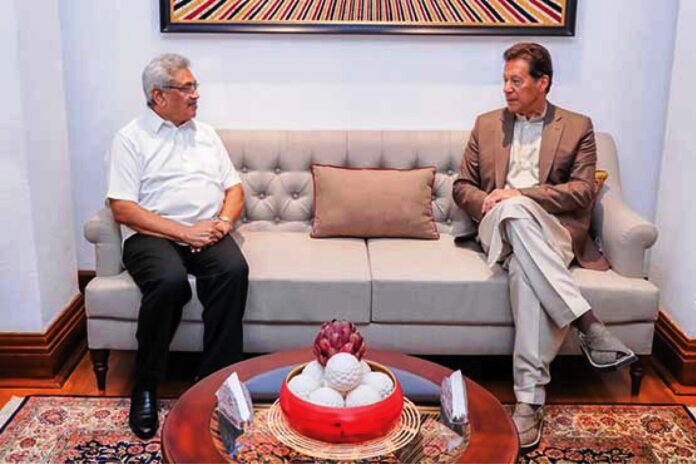 Sri Lankan president, PM express confidence in Pakistani authorities; wife of lynched victim pleads for justice
ISLAMABAD
Prime Minister Imran Khan has assured Sri Lankan President Gotabaya Rajapaksa that Pakistan would do justice in the tragic Sialkot mob lynching incident.
A Sri Lankan national, Diyawadanage Don Nandasri Priyantha, who had been working as a manager at a private factory in Sialkot, was tortured to death and his body set on fire by a mob over allegations of “blasphemy” on Friday.
The prime minister, in a tweet on Saturday, said he conveyed the nation’s anger and shame to the people of Sri Lanka at the killing of Priyantha.
“I informed him 100+ people [have been] arrested and assured him they would be prosecuted with the full severity of the law,” the prime minister added.
Wife pleads for justice
Priyantha’s wife has pleaded for justice for her slain husband from both Pakistani and Sri Lankan leaders, Sri Lankan news outlet Newswire reported.
“I got to know about the brutal murder of my husband from the news. Later I saw this on the internet as well. He was a very innocent man,” she said, talking to reporters from BBC Sinhala.
“I request leaders of Sri Lanka and Pakistan to do justice for my husband and two children, by bringing the perpetrators to justice” she went on to say.
The deceased’s brother said that Priyantha had been working in the Sialkot factory since 2012.
Sri Lankan PM, president hopeful
Before holding talks with the premier, the Sri Lankan president — as well as Prime Minister Mahinda Rajapaksa — expressed confidence that PM Imran Khan would ensure justice in the case.
The president, while expressing concern over the matter in a statement on Twitter, hoped that the Pakistani government would ensure the safety of Sri Lankan workers in the future.
“SriLanka trusts that PM Imran Khan and the Government of Pakistan will ensure justice is served,” the president tweeted.
PM Mahinda Rajapaksa, whose government is a key regional ally to Pakistan, took to Twitter Friday and described the development as “shocking”.